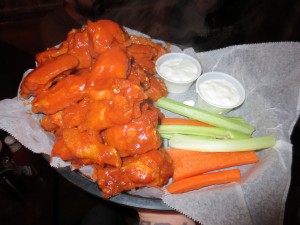 It doesn’t matter what your interests are, there’s a club, store, group, restaurant, etc in NYC to support it. No matter how weird, odd, unique or distinct your mix of interests lie, there’s a way for you to enjoy it. Let’s say you’re into University of Michigan Basketball and Football, as well as the best Nachos along with your fandom of the Boston Bruins, Patriots, Red Sox and Celtics but you also like Craft Beer and Hot Wings. Maybe that’s not a far-fetched match but it’s certainly what’s happening at Professor Thom’s in the East Village. With two floors, a private room, 17 TVs and a ton of good Beers on tap, it’s a great place for good times and game times. While Professor Thom’s is widely known for not only having the best & biggest Nachos, they also have a rep for great Wings.

Prof Thom’s Wings are of the standard variety. No whacky prep, no off-center sauces, no bizarre ingredients. These Wings are what you might find in a dictionary next to the words but much better than many of the rest. The Hot Wings are actually hot. Beware, the peppery heat will linger much after you’ve finished eating. It’s probably the reason we swigged down so many tasty cold Beers while eating! If you’re looking to pound down and mass consume Wings, these are not the Wings you’re looking for. Much like the car in the movie / book “Christine” they’ll seem all nice at the beginning but you’ll be feeling the pain later.

While chomping at the Hot Wings, the incredibly friendly wait staff offered to make us an order of Wings using a special Sauce she had come up with. Full reveal, they knew why we here this day. BUT WHO ARE WE TO SAY NO!??! The Wings came and had a sour meets sweet mix of tastes. After some tasting, questions and discovery, we discerned that the sauces was 2 parts BBQ with a serious dose of heat. I can’t say PT’s will have these available when you go, but definitely worth asking for. Either that or ordering naked Wings with their Hot Wing & BBQ Sauce on the side and trying to mix it up yourself. 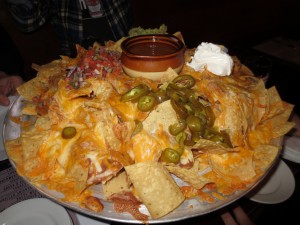 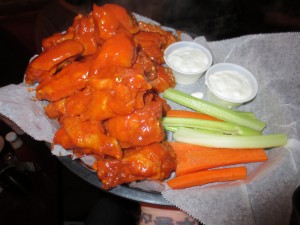 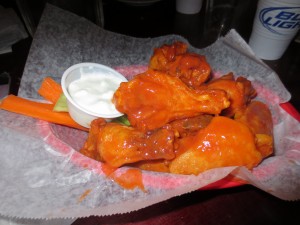 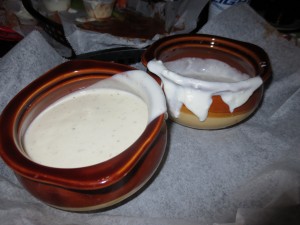 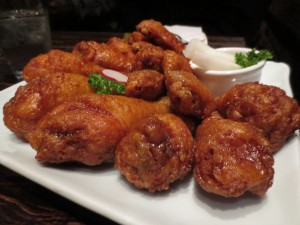 As I was saying, we have everything you could ever want in NYC or at least some odd hybrid that makes it uniquely New York. Take Mono+Mono for instance. If you had a serious hankering for Korean Fried Chicken but wanted to eat it while you were sucking down with Soju Cocktails while listening to vintage Jazz played solely on vinyl records, it’s here. Boasting a library of more than 30,000 volumes of Jazz records played on vintage tube amps, Mono+Mono sets the tone for unique. But that’s not the reason to come here, it’s al about the highly sought after Korean Chicken which can take up to 30 minutes to make.

If it’s Wings you want here, be sure to order them right away, the 30 minute rule is no joke. The first thing you’ll notices about the Mono+Mono Wings are their intense crispy Skin. That’s achieved by frying them, very deeply, twice. That method burns of the excess fat, thus creating a very thin and yes, crispy. Once they’re removed from the fire, the Wings are brushed with your choice of Soy Garlic or Hot & Spicy Sauces. Not only do I recommend you order them right away, order them both. The Chefs are sure not to over Sauce them so as to let the incredibly crunchy Skin be the taste driver of the Wings. I preferred the Soy Garlic to the Hot & Spicy but would actually be curious to see what happened if they were combined. 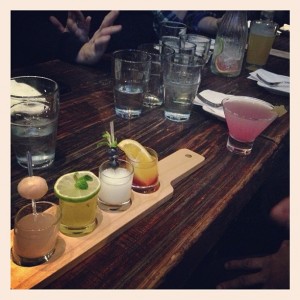 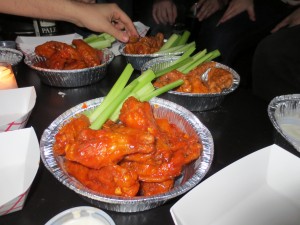 Dan Petersen from That Burger makes one of the best Burgers in NYC, let alone anywhere. They’re a high-end, yet affordable version of a fast-food Burger made with his own proprietary blend of Pat LaFrieda Beef, all fresh Produce and Martin’s Potato Rolls. You can wash it down with an incredibly large selection of Bourbons & Craft Beer or the libation of your sort, 7 days a week at Idle Hands Bar. You can also say that I am biased because Dan’s restaurant is located inside the bar I own. Well, if you don’t trust my opinion on Burgers yet, you should either get off this blog or keep reading. Besides that, here’s proof that I was loving Dan’s Burgers way before we ever invited him into the place.

But we aren’t here today to eat Burgers. Today is all about the Hot Wings. Normally we would not do three locations in one day of a Wing-Off but as this was the birthday of Wing-Off founding member Doug O, we had to take this up a notch. Dan is not one to take anything involving his Food lightly so we knew we were in for the goods. Dan brought out three types of Wings; Hot, Spicy BBQ and his proprietary “Ecto-Cooler Wings.” All 3 varieties were served on perfectly cooked and crispy Wings. The Hot have some real heat and real peppery taste. The traditionalist would be proud. The Spicy BBQ take that style and sweeten up a bit. For those that like Heat but want a little more flavor in them, go for these. Lastly, we bit into the Ecto-Cooler Hot Wings. The Sauce is a blend of That Burger’s signature Hot & BBQ Sauces with Thousand Island Dressing and “The Green,” from Brooklyn Salsa (a Salsa made from Heirloom Tomatoes & Raw Ginger.)

Along with the Wings (and the Burgers), That Burger also has the best Tater Tots in NYC. If you’ve found better, please let me know. Not only do I need to have them, I will enact a fact finding Tot mission. What makes Dan’s Tots so great are not only a keen eye on proper cooking but it’s also the unique array of dipping sauces that Dan stirs up in house. While the bar universe is currently obsessed with cocktail mixology, Dan is focused on Dipping Sauce mixology. We ripped through Crabby Mayo, Bourbon Ketchup, more Ecto-Cooler and one of Dan’s other signature sauces, “Cowboys From Hell.” Aptly named & dedicated to the band Pantera, this sauce is a blend of BBQ Sauce, Ranch Dressing, That Burger’s Signature Hot Sauce and then spiked with an IPA Beer. It’s as unique as it is delicious. 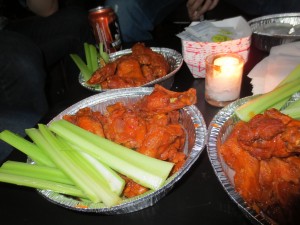 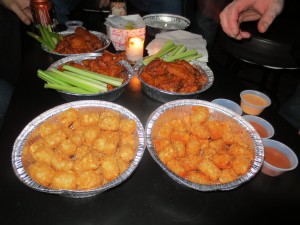 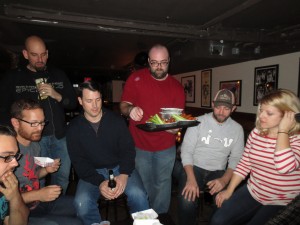 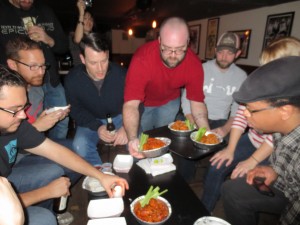 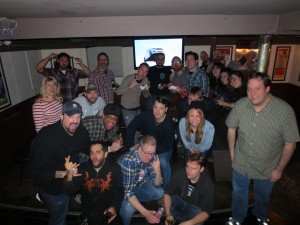 WING -OFF 19 OFFICIAL WINNER – THAT BURGER!
After all Wings were eaten, a vote was taken and That Burger was the winner. Seriously, there was a not a bad Wing in the whole bunch. Every place we ate on Wing-Off 19 is worth checking out if your a true fan of Hot Wings. But then again, that’s kind of the point of Wing-Off. We aren’t eating from a pool of just any place that serves Wings, we only eat Wings at restaurants and bars known for having great Wings. Nothing sucks more than a crappy Hot Wing which turns making a great Hot Wing into an art form. Congrats to That Burger for winning but don’t be mistaken, the Wings at Professor Thom’s and Mono+Mono are great.

So with that … we make a very, very special announcement.
On January 28, 2007 the Wing-Off turns 6 years old. Considering this all started off a silly argument over who had the best Hot Wings in NYC, Down the Hatch or Scruffy Duffy’s (RIP) and has gone on to 19 total challenges shows a serious dedication to the finding the best Hot Wings. It’s now time to take it to a new level. To celebrate 6 years of eating the BEST WINGS IN NYC, we are making a trip to the mecca to see if our tastes live up to the originators. On January 26, 2013 we will all travel to Buffalo, NY to pit Duff’s Famous Wings against the Anchor Bar. It’s all going to be part of BROHD TRIP 4. Upstate NY, you’ve been warned.