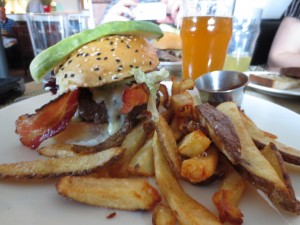 THE CONQUEST
There are 19 million people living inside the walls of New York City’s 5 boroughs. Those 19 million people have their choice of more than 25,000 different restaurants and bars. Seemingly there is no end to them. Technically, you could eat at one of them every 1.15 days and by the time you were 81 (the average life expectancy of a New Yorker) you would have eaten them all. Chances are you have some catching up to do so the question is, where we going for lunch? My suggestion, screw NYC for once, get on a train and go to the Peekskill Brewery. 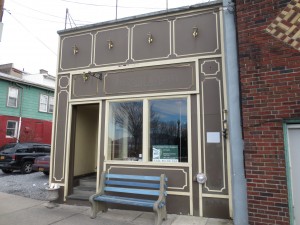 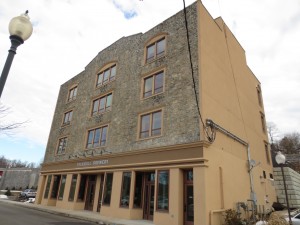 For $22 you can get a round-trip ticket on Metro North on a Saturday afternoon for a one hour train ride up to one of the best places for Food & Drink  in the greater New York City Area. The Peekskill Brewery, located just down the block from the Peekskill Train Station has an experience unlike what you can get inside the Big Apple. The brewery, originally located half a block away, just moved into their new 5 story facility and have started pumping out some tasty Craft Beer along with some locally sourced pub vittles. The brew house and it’s facilities are state of the art, most of which was custom built by Metalcraft Fabrication. If you’re lucky enough to get a tour, you’ll not only see the pristine brewing facility but also their specialty production items which help to make them a very unique brewery. This includes the fermenter that’s entirely dedicated to brettanomyces yeast. 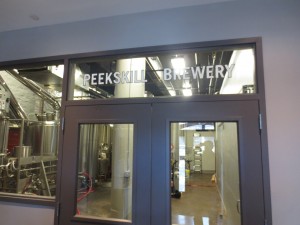 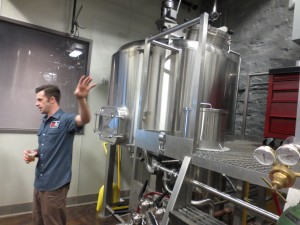 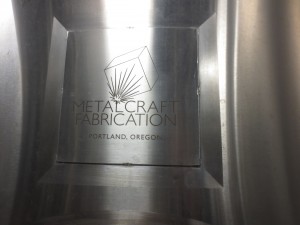 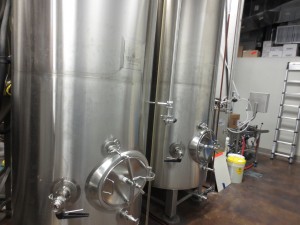 Brettanomyces is an incredibly difficult and wild yeast to tame. A lot of brewers consider it a contaminant that brings unwanted flavors. But not the brewers, no, let’s call them Bier Wizards, at Peekskill Brewery have chosen instead to tame this wild beast to make unique Belgian and Sour Ales. The yeast is so wild and difficult that if not contained properly, it will infect every part of the brewery and therefore every Beer being made. Containing it takes skills, precision, intelligence and a vast desire to make incredibly different Brews. An outbreak can literally ruin every Beer in the house, thus making it the Zombie Virus or Beer Zero of the Brewniverse. 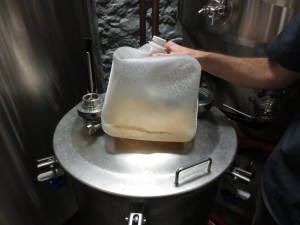 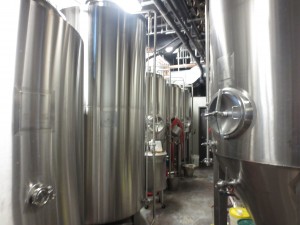 To add to their beer magics, the Peekskill Brewery has also built and installed a coolship. This is a process that dates back hundreds of years where once the wort is done boiling, it’s sent to a large tank (traditionally copper) to cool the brew. The idea is to let it air cool and sometimes pick up wild yeast, which is everywhere. Most yeast floating around the air is pretty weak and since the beer is so hot when it enters the coolship, it dies on impact. It is however a very natural way to cool Beer that before refrigeration, was the only way to do it. The coolship is located on the 3rd floor, above the pub, where it goes to cool off. The room has windows on both sides as well as a large fan that is turned on to create a huge convection effect. 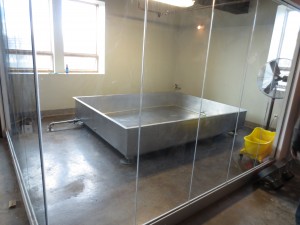 Once the Beer is done fermenting it’s moved to the bright tanks. It’s here where the brewing process ends. Once in the bright tank it can be transferred to bottles, kegs, cans or be moved into the cooler to be served. At Peekskill, this is where things get really interesting. First of all, they don’t have a bottling line. Just a single machine that hand bottles one at a time. It’s quite the tedious process which is why when they finally start to bottle it will be for limited quantity beers that will only be sold, offered or aged in their cellars. As for the larger batch stuff, if you drink it in the brew pub or tap room, it’s going to come straight from the tank to the tap. It’s guaranteed to be some of the freshest Beer you will ever have. 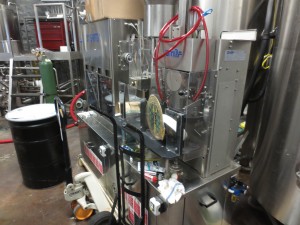 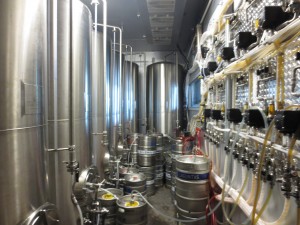 Outside of the incredible brewing facility, the Peekskill Brewery has a tap room on the main floor for those curious to slug away the day over some tasty Craft Beers. For those looking for a meal or more of a family experience, they can head up to the 2nd floor balcony where the brew pub is housed. There one can sit and order from a menu comprised of Soups, Salads, Appetizers, Sandwiches and all sorts of Pub fare cooked right in their full sized kitchen. Beers are available on both levels. 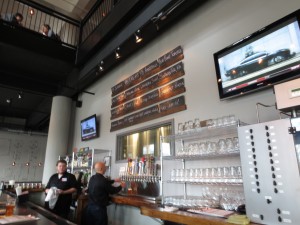 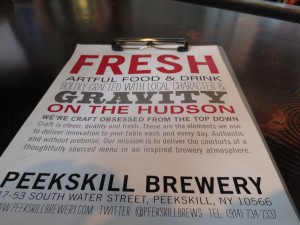 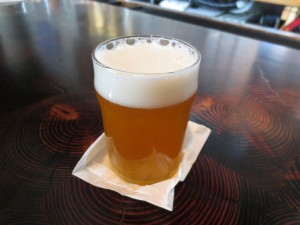 It’s definitely worth a trip out of the city especially when you can the views are this good along the Hudson River. Be sure to stop at the Yellow Brick Road (yes that one!) which is located on the West side of the street just before you arrive at the brewery. 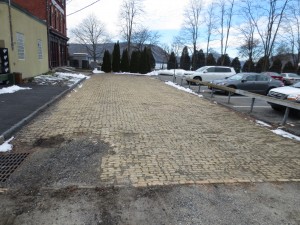 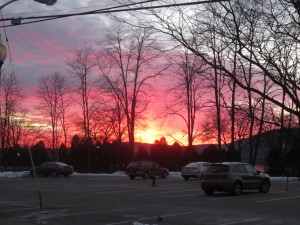 THE BURGER
After all the Beer talk, tasting and tour, we couldn’t wait to sop it up with some tasty pub vittles from the kitchen. I started off with an order of the soup of the day, Allagash Gouda Soup. When the server announced this as a daily special, the only thing that kept my jaw from hitting the floor was the need to say “YES PLEASE!” Whereas one would normally expect a soup made from Beer & Cheese to be pretty thick and hardy, this was not. In fact, it lighter than I imagined it would be in both texture, consistency and taste. The flavors were all in the subtleties of the beer and Cheese it was made from. After slurping down a few delicious spoonfuls, I asked for some Crusty Bread to dip into it. I would call this a savory dream. My buddy Nick called it “the reason Soup was invented.”

We followed the Soup with an order of Hot Wings. The Wings at the Peekskill Brewery come still together, meaning “1” is both a Wing and a Drumstick. Unfortunately these all got scooped up before I could get one but everyone else thought they were great. I patiently waited for my PB Burger to arrive instead. It comes with Applewood Smoked Bacon, Grilled Red Onion, Grafton Cheddar & Aioli on a house baked, Seeded Bun. On the side, the PB Burger is served with Handcut Fries.

Let’s start with the Fries. Yes, Yes, YES the Fries. Cut from whole Potatoes and fried, I’d be hard pressed not to call these perfect. If you’re a French Fry person, put these on your radar. They were just crispy enough on the outside and still pillowy on the inside. The skin on, frying process and seasoning used were all right on the money. We then dipped them in the Allagash Gouda Soup and almost fainted from awesomeness.

Onto the Burger. The Bacon; big, thick, hearty, smoky, sweet, savory Bacon rashers that danced a dance of joy around the Sandwich.  The Garlic Aioli, well, that too gets a big thumbs up. I firmly believe that Ketchup on a Burger is just a straight no. Thousand Island / Secret Sauce is good but it’s so common. Beyond that, there isn’t a whole lot of other sauces I want on a Burger, but Peekskill Brewery’s Garlic Aioli, i’ll take any time. It added some juiciness to the bite and a nice Savory flavor current. The Grilled Red Onions were great as well was the soft Grafton Cheddar. The Beef, a nice, loosely-packed, soft and thick patty that’s served fresh was sourced from a great provider. It’s go good flavor and prior to being cooked, you could tell someone cared about this Burger. I did order the Burger medium-rare while it came closer to medium well, which was a bit of a let down. My only other suggestion, and I made this known when they asked my opinion, would be to season the Burger a little more before cooking. A decent sprinkle of good Sea Salt and Cracked Black Pepper would made a huge difference. It’s the only reason I’m not rating this Burger and 8.

If you’re looking for great Food in a great atmosphere with great local Beer, you’ll want to experience the greatness of the Peekskill Brewery. This crew is making Beer and Food because they love it. Although they could talk to you about Brewing at the most scientific of levels, their intent is to make Craft Beer for everyone. 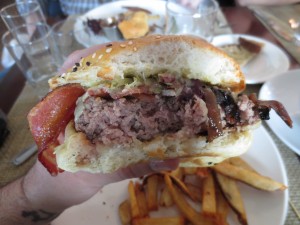 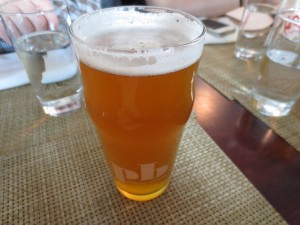 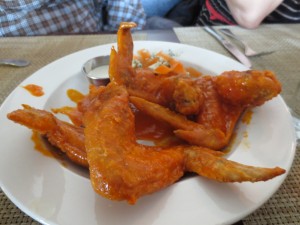 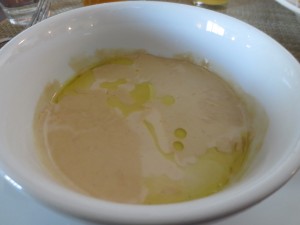 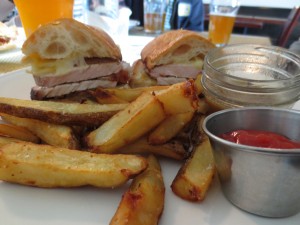 The Peekskill Brewery scores an 8  on The Rev Meter.