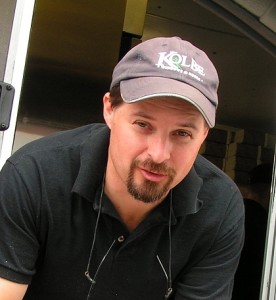 Michael Fritsch has been making hamburgers at Eastside Big Tom for longer than his parents know about. They slept while he and his brothers took over the place late at night trying out combination after combination of burgers. At thirteen years of age he could frequently be found at two or three in the morning making hamburgers just to see what they tasted like. Now he’s a freak vegetarian that rarely eats meat outside of his own place but owns and operates the oldest drive-thru restaurant in Washington State. Ain’t life funny.

Where do you live: Olympia WA

Favorite style of Burger: Grilled Meat, toasted bun,  American cheese, nothing else. I want to taste the meat.

What is the one Burger you’ve always wanted to try but still have not: I’m intrigued by Smashburger, it’s on my list.

The secret to making a great Burger: Don’t overcook the effin’ meat.

Under no circumstances whatsoever, what should NEVER be put on a Burger:  Onions, you want to taste the rest of the burger, onions don’t belong on there. Grilled onions, whose idea was that?  I want their name and a time machine. Problem solved.

If you could eat any Mythical Creature which would it be: Unicorn for sure. You know that’s got to be good.

If you could have a Burger with anyone alive, or dead, fictional or real, who would it be and where would you take them: Johnny Cash and I’d take him to Eastside Big Tom for a Bacon Burger.

Name one Burger in LA that for once, people should get off a plane and go eat instead of In-N-Out: Umm, I’ve never been to LA, is that bad?  Still never had In-N-Out, either. Guess it should be on my to do list, but it’s not.

Please use this space to talk about or plug anything else you want: The Squishy Burger ~ banned from our restaurant in 1982, by Charles Fritsch, because it’s a total pain in the ass to make and people kept stopping by to order it even though it wasn’t on the menu. Now that the place is mine I make it from time to time and send photos of it to my brothers out of state just to make them jealous. It’s still not on the menu and is still a total pain in the ass to make.