For those of you who do not know me – my name is Adam Poch. I was a contestant on CBS’ Big Brother 13. One thing I was known for on the show is my love of Bacon, which is why Rev & I have been friends for many years – after all, what goes together better than bacon & burgers?

THE CONQUEST
While being locked inside of a house playing a game for a half million dollars against random strangers, friendships form. Some of these friendships turn into showmances. In the first few days of getting to know each other, I would see my house guests Dominic Briones & Daniele Donato joking around in a flirtacious way. While neither one of them would say they “liked” the other – I could tell there was something more there. Think back to when you were a kid in elementary school and you would tease that boy or girl you had a crush on. This was how their flirtmance was going. Despite Dominic leaving in the 3rd week, Daniele would still talk about him in the same way. After they both were back into civilization, their flirtmance grew into a real relationship. It was no surprise to me when they announced (to a small few) that they were getting married. On a sunny January day in Huntington Beach California they were wed. Surrounded by family, friends, and some Big Brother Alumni – we watched as they read their own vows and declared their love for each other in a beautiful ceremony. Their love for penguins (because they mate for life) was evident as they had April’s (from BB6) son dressed as a penguin as ring bearer – and a husband & wife penguin as their cake topper. I may be a metal head, but I do have a soft side – and seeing these 2 together, you cannot help but feel the love! 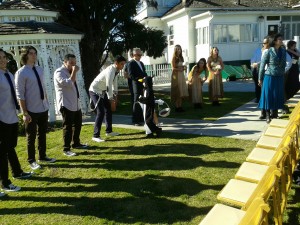 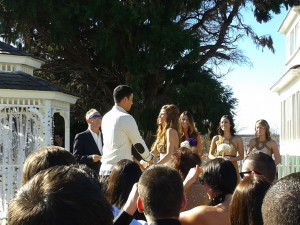 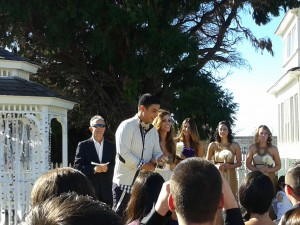 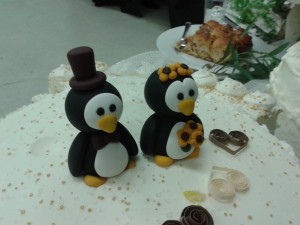 THE BURGER
When I found out I was going to Huntington Beach – I remembered that a Slaters 50/50 opened up there a little more than a year ago. As any good bacon fan knows – this place is known for their 50/50 blend burger. It’s 50% ground beef & 50% bacon. One look at their menu – you will see they take their bacon seriously. Fried Bacon Mac & Cheese balls, Jalapeno Bacon Mac & Cheese with Beer Cheese sauce & Cheeze-It crust, Fried Chicken covered in bacon-infused country gravy (and bacon) between 3 buttermilk pancakes, Maple Bacon Milkshake, Bacon Brownies covered in candied bacon & chocolate ganache, and even have a Maple Bacon Beer made just for them called Latitude 33 Slater’s 50/50. Since I had only heard about this place from other bacon lovers & seen a few things here and there on TV – I had to go there. So the day after the wedding a few of us headed over there to watch the NFC & AFC Championship games. I started with the Latitude 33 – and the bartender kicked it up a notch by putting a huge strip of bacon in the beer for me. Kind of like a kid with fun dip – I was sticking the bacon into the beer and lapping it up. The next thing I see, the bartender is making these 2 shot-glass shots and putting bacon in it. I had to ask what it was. They call it the breakfast shot – one glass has Jameson & Butterscotch Schnapps with a strip of bacon, the other glass has orange juice. The order goes, drink the Jameson/Butterscotch – eat the bacon – drink the OJ. Your mouth will taste just like you had a big Sunday morning breakfast.

While I sipped on cocktails – I was paying almost as much attention to the food that was being served around me as I was on the football games. Everything looked so good, so as soon as the bacon monster inside my belly could not take anymore – I grabbed a pencil and my “Design It” form. Yes – they have their own combinations of burgers on the menu to choose from, but I needed to “Adam” it up. First choice was what kind of meat. Well, this was a no brainer – the 50/50 patty. But to take it to the next level – I had them mix in their Fire Beef as well (beef with hot peppers) 1/3 lb of each. Next the roll – once again, duh – the Bacon Pretzel Roll. Now what cheese would work on this burger – the Bacon Cheese of course – which is basically american cheese with bacon in it. Now it’s time to decide what other toppings I would put on my creation. Jalapeno’s? SURE! House Made Bacon Infused Country Gravy? Let’s party! Thick Cut Bacon? Like you even had to ask me. And a bit of Bacon Ketchup to bring it all together. Another fun part of making your own burger is you get to give it a name. Well, since I was here with some of my Big Brother Alumni – I called this – the BIG BACON BROTHER!

As soon as I gave it to the bartender to bring back to the kitchen, I started getting antsy. “Where is my burger? C’mon already – bring me my Bacon Frankenstein!!” As soon as I saw the server turning the corner – I knew, it was time to chow down. The only thing that disappointed me at first was there was not enough of the Country Gravy – so I asked for more. They brought me out a bowl – which was perfect as I dipped each bite into the white salty chunky goodness! Halfway though the burger – I started to sweat. I can usually take Jalapenos with ease, so there had to be some really hot peppers in the Fire Burger portion. Or maybe I was just getting the meat sweats. Either way – this was heaven on a roll. I was sad when I realized I was down to my final bite for this was a burger I had read about, seen on TV, and dreamed about for a long long time – but that did not stop me from putting that morsel of goodness in my mouth and savoring the final few chews.

A couple minutes later – when I came out of my Bacon Nirvana trance – I leaned forward and said to the bartender – “THAT WAS F**KIN AWESOME! Now dessert me my good man!” Yes – I was going to get the Bacon Brownie. This was not my first bacon brownie – but it was my first bacon brownie sundae and I slurped up every last bit (with a little bit of help from my friends). The bacon monster inside of me was still not done – and when someone got the Chicken & Pancakes – I had to take a few forks full. Just as delicious as everything else I had sampled on this fine day.

I am so happy I finally made it to Slaters 50/50 and next time in SoCal I will do my damnedest to get back to one of their 4 locations – but the way this place is going – it may not be long before there is a Slaters near you! (who’s got some extra dough that they would like to invest with me to bring one to NYC????)

The only thing Rev would not like about this burger – is the 50/50 patty has to be cooked Medium, Medium Well, or Well Done. 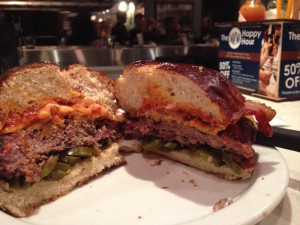 But this is nothis review, this is mine – so I am giving this a 10 out of 10 ounces. Not just for the burger – but for the whole Slaters 50/50 experience!
-Adam Poch 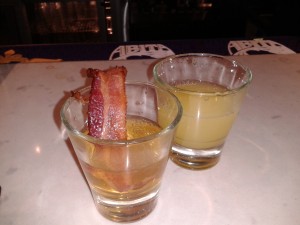 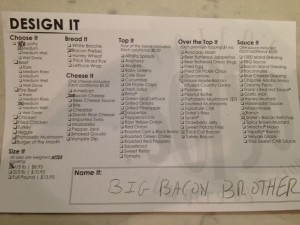 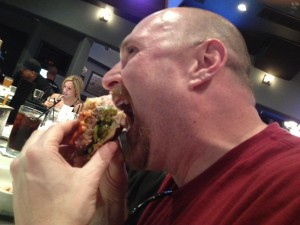 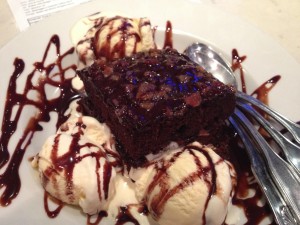 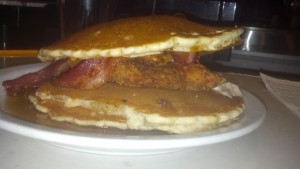 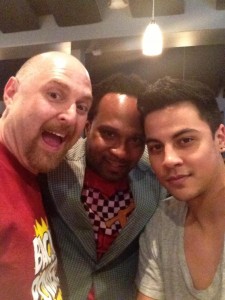