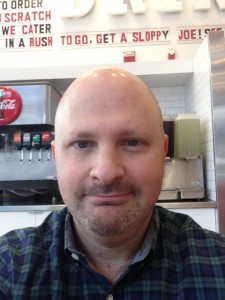 Brooklyn native Jonathan Schnipper is happy to have called Manhattan home since 1987. He is a graduate of the New York Restaurant School with a focus on management. Consumed with a passion for food his focus quickly turned to cooking. He is the Chef and founder (along with his brother Andrew) of New York’s Hale and Hearty Soups. After his departure from Hale and Hearty in 2006, he and Andrew traveled the country tasting burgers and other regional foods. In 2009 Schnippers was born. Schnippers quite simply serves the foods that Jonathan and Andrew love. Give Jonathan a great burger with some gooey mac and cheese and he is a very happy man. He lives in Manhattan with his wife Tina and their dog Sophie.

Where do you live: Manhattan

Favorite style of Burger: Love them all. But smaller always makes me happy.

Burger that haunts your dreams at night: Dare I say my own? The Father’s Office Burger in L.A.

What is the one Burger you’ve always wanted to try but still have not: Bobcat Bite Green Chile Cheese Burger.

The secret to making a great Burger: All starts with the beef. Blend and grind have to be right. If that’s not there you have a problem. Next would be salt. Never underestimate the power of salt when making a great burger, especially on a griddle.

Under no circumstances whatsoever, what should NEVER be put on a Burger: Any kind of fruit. Grilled pineapple? No thanks.

If you could eat any Mythical Creature which would it be: Odd question Rev. But since you asked. It would have to be the Chupacabra. Heard it tastes like chicken.

If you could have a Burger with anyone alive, or dead, fictional or real, who would it be and where would you take them: Many choices here. Great chefs? Smart Restaurateurs? It would have to be someone food related for me. Ray Kroc it is. The man built the world’s largest restaurant company and he did it with burgers. That is someone I would love to talk to. I would take him to Schnippers just to hear what he had to say about it.

Name one Burger in LA that for once, people should get off a plane and go eat instead of In-N-Out: As I said earlier, Father’s Office.

Please use this space to talk about or plug anything else you want: Going to L.A. thursday to check out some new concepts and eat some great food. Excited about that.