The Cattle Call – Dan Pashman from The Sporkful

The Cattle Call – Dan Pashman from The Sporkful 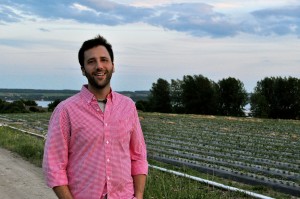 Dan Pashman is the creator and host of The Sporkful, a James Beard Award-nominated podcast and blog where he discusses, debates and obsesses over ridiculous food minutiae, in search of new and better ways to eat. The Sporkful’s motto is, “It’s not for foodies, it’s for eaters.” He also hosts the Cooking Channel web series Good to Know and has appeared on NPR, ABC, Food Network, History Channel, Slate and others. He’s currently working on the first Sporkful book, to be published in 2014 by Simon & Schuster.

Burger that haunts your dreams at night: The bacon double cheeseburger with grilled onions from the Diner Grill on Irving Park in Chicago

What is the one Burger you’ve always wanted to try but still have not: It was Corner Bistro until I read your review of it!

The secret to making a great Burger: Cheese on the bottom

Under no circustances whatsoever, what should NEVER be put on a Burger: Pickles

If you could eat any Mythical Creature which would it be: a Celestial Nymph

If you could have a Burger with anyone alive, or dead, fictional or real, who would it be and where would you take them: Mr. Rogers, Five Napkin Burger

Name one Burger in LA that for once, people should get off a plane and go eat instead of In-N-Out: Don’t know enough about LA burgers to say

Check out an episode of the Sporkful when Dan and I take a deep-deep dive into the world of properly made Hamburgers. Wait…no, I mean Cheeseburgers.

2 Responses to The Cattle Call – Dan Pashman from The Sporkful