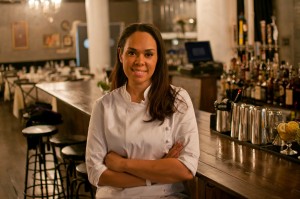 Chef Ariel Fox can be found in the kitchen every night, overseeing a small close-knit crew of aspiring culinary professionals, creating the new classic American fare that is Harding’s specialty.  Chef Fox believes in the simplicity of elevated, yet approachable American food, enhanced by the classical tradition in which she was trained. Chef Fox spent four years opening restaurants with THE ONE GROUP before taking on the role of Chef de Cuisine in the opening of the acclaimed NoHo restaurant ACME.  Truly satisfied with her contribution to the wild success of ACME, Chef Fox found herself presented with the opportunity of joining an exciting team of young, passionate individuals as the Executive chef in the opening of Harding’s.  Ariel continues to collaborate with her staff and the rest of the management team at Harding’s on a daily basis to develop dishes and cocktails for guests to enjoy as the seasons change.

Burger that haunts your dreams at night: The burgers I get on Monday nights with my cousins at Fort Defiance in Red Hook, Brooklyn.  And the Tom Collins that I suck down with it!

What is the one Burger you’ve always wanted to try but still have not: I’ve  heard that there is a pretty stellar burger at Townhouse in Detroit and a killer one at Holeman and Finch in Atlanta Georgia. Both Chefs use a great blend.  I would love to do a cross country burger tasting trip someday!

The secret to making a great Burger: Its all about the grind and the bun.  You have to have the right blend of meat, and the fat content has to be just right so that it makes your burger super juicy, without tasting overly fatty.  And of course you have to have a great nun that can stand up to your juicy burger. Just toasty enough on the outside, but soft on the inside.

Under no circumstances whatsoever, what should NEVER be put on a Burger: A banana

If you could eat any Mythical Creature which would it be: A Jabberwocky

If you could have a Burger with anyone alive, or dead, fictional or real, who would it be and where would you take them: I would eat a burger with my Grandmother in Hobbiton Middle Earth. And then we would drink some ale and smoke some pipe weed from the Shire….

Name one Burger in LA that for once, people should get off a plane and go eat instead of In-N-Out: The burger at Father’s Office, great place too!

Please use this space to talk about or plug anything else you want: Going to L.A. thursday to check out some new concepts and eat some great food. Excited about that.

Read a Burger Conquest from Harding’s.