The Cattle Call – Chef Ryan Harkins from Grill ‘Em All

The Cattle Call – Chef Ryan Harkins from Grill ‘Em All 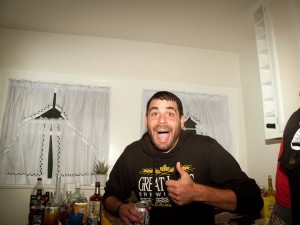 Ryan Harkins is born/raised in Cleveland, OH and now lives in Los Angeles where he is one half of the tag team duo behind the burger force known as Grill ‘Em All. Oh, and he’s a total bad ass.

Where do you live: Los Angeles / Eagle Rock, CA

Favorite style of Burger: all

Burger that haunts your dreams at night: I can’t tell if you mean this in a good or bad thing, if its good; all of ours. if its bad; Jack In the Box, they rip us off constantly.

What is the one Burger you’ve always wanted to try but still have not: Shake Shack.

The secret to making a great Burger: Don’t fuck it up, cook it medium rare.

Under no circumstances whatsoever, what should NEVER be put on a Burger: I havent found an answer to that as of yet.

If you could eat any Mythical Creature which would it be: all of them, all mythical creatures. they all sound delicious. Dragon sounds like it would be a bit tough though, but i bet if you braised it long enough it would be good.

If you could have a Burger with anyone alive, or dead, fictional or real, who would it be and where would you take them: Ronnie James Dio. To my house so we could hang out and I could say Ronnie James Dio, the greatest dude ever hung out with me at my house.

Name one Burger in LA that for once, people should get off a plane and go eat instead of In-N-Out: Grill ‘Em All!

Please use this space to talk about or plug anything else you want: Come to Grill ‘Em All, smash burgers, face beers. Get fun.

Check out The Cattle Call with Matt Chernus, the other half of Grill ‘Em All.