The Cattle Call – Matt Chernus from Grill ‘Em All

The Cattle Call – Matt Chernus from Grill ‘Em All 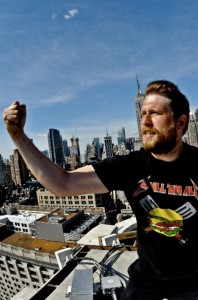 Where do you live: Los Angeles, CA on the wrong side of the burger truck

Burger that haunts your dreams at night: All of ours…it’s a 24/7 love affair

What is the one Burger you’ve always wanted to try but still have not: The Wendys burger with Foie Gras in that was only for sale in Japan

The secret to making a great Burger: Fill it with extreme amounts of love and a hint of hate

Under no circumstances whatsoever, what should NEVER be put on a Burger: over cooking

If you could eat any Mythical Creature which would it be: Unicorns that have bred with Freddy Krueger or a CHUD (Canibalistic Humanoid Underground Dweller)

If you could have a Burger with anyone alive, or dead, fictional or real, who would it be and where would you take them: Lemmy from Motorhead…I would have him pick me up at my place and go to Grill Em All in Alhambra. After that he could buy me drinks at the Rainbow Bar and Grill before driving me back home again.

Name one Burger in LA that for once, people should get off a plane and go eat instead of In-N-Out: Apple Pan on the west side of LA

Check out The Cattle Call with Chef Ryan Harkins, the other half of Grill ‘Em All.