The Cattle Call – Chef Gregorio Pedroza from The Alewife NYC

The Cattle Call – Chef Gregorio Pedroza from The Alewife NYC 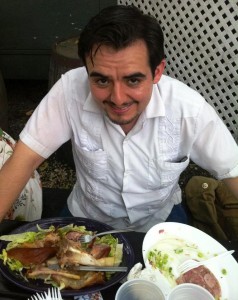 Gregorio Pedroza studied at the French Culinary Institute (Jan ’10). He spent most of his life cooking non-professionally and fighting the idea that he could do this as a job. Now, he is having the time of his life and he eats out the world and feeds the good people that cross his path. Degrees from USC (Theatre) and the American Musical and Dramatic Academy also assure that you may hear a showtune or 3 being hummed by him from the depths of the kitchen. Currently rocking the Executive Chef bandana at the Alewife NYC with pride

Where do you live: Glendale, NY

Burger that haunts your dreams at night: The Spotted Pig Burger… in an awfully Nightmarish way.

What is the one Burger you’ve always wanted to try but still have not: Any burger using Pat La Frieda’s Black or White Label

The secret to making a great Burger: Don’t be a pretentious douchebag about it

Under no circumstances whatsoever, what should NEVER be put on a Burger: Truffles

If you could eat any Mythical Creature which would it be: Paul Bunyan’s Ox, Blue

If you could have a Burger with anyone alive, or dead, fictional or real, who would it be and where would you take them: I’d have a burger with George Bailey (It’s a Wonderful Life) at In-n-Out.

Name one Burger in LA that for once, people should get off a plane and go eat instead of In-N-Out: TOMMY’S. Fun, messy Chili Burger. (FIGHT ON USC TROJANS!)

Please use this space to talk about or plug anything else you want: I’m a big fan of the ALEWIFE BURGER at ALEWIFE NYC in Long Island City. Executive Chef Travis Yuen surprised me with wanting to put Pork Belly and Sauce Raifort on a burger… and it works oh so well. He and I also drunkenly do a podcast called NONSENSICAL CHEF RANTS