The Cattle Call – Chef Travis Yuen from The Alewife NYC

The Cattle Call – Chef Travis Yuen from The Alewife NYC 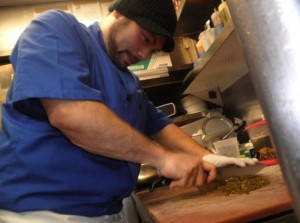 Travis is a graduate of the French Culinary Institute. Before he put on his chef jacket Travis graduated from St Johns University with a degree in Communications. A Jack of all trades but primarily focuses on paring food with beer. He is most known for his crazy concoctions that he serves up during his special beer dinners. You can currently catch him serving up his dastardly creations as the Executive Chef of West 3rd Common and Alewife NYC.

Where do you live: Glendale, New York

Burger that haunts your dreams at night: Spotted Pig Burger- I still cant get that damn taste of the Roquefort out of my nightmares!

What is the one Burger you’ve always wanted to try but still have not: Chunky’s 4 Horseman Burger in San Antonio! Food Challenge Accepted!

The secret to making a great Burger: Simplicity and Don’t mess with it once its on the grill!

Under no circumstances whatsoever, what should NEVER be put on a Burger: Bleu Cheese!!! Its to overpowering of a flavor- I want to taste the delicious beef not some stinky overpowering cheese!

If you could eat any Mythical Creature which would it be: Pegasus

If you could have a Burger with anyone alive, or dead, fictional or real, who would it be and where would you take them: Homer Simpson- Tipsy Parson for the Luther Burger-  MMMM Donuts! MMM Donut Burger!!

Name one Burger in LA that for once, people should get off a plane and go eat instead of In-N-Out: Since I have only been to LA once I could not in good standing say anything on this subject since I only sought out In-N-Out

Please use this space to talk about or plug anything else you want: Travis is one half of the NonSensical Chef Rants, alongside Chef Gregorio Pedroza, these two culinary knuckleheads podcast about the culinary world as well as current events in their own brash, uncut, unedited style of rant-like antics.