La Bonbonniere – There Were Burgers Before The Interwebs 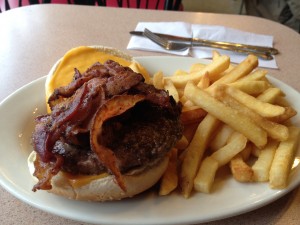 THE CONQUEST
With 600 Burgers logged on this site you would think I’ve eaten nearly every damn Burger in New York City. Maybe at least all the ones people talk about or the classic Burgers that have been here forever. Even if I haven’t eaten there you would think it’s safe to assume I know about it but just haven’t gotten the chance. I think this too and then out of the blue, it happens. Someone recommends I check out a Burger that’s been here since before blogs existed. I’m blown away every time. I have master cake maker Rodolfo Goncalves from BMQ Desserts to thank for the most recent suggestion.

Before the Food Network, Bravo, The Travel Channel and other food TV programs launched the careers of many a seasoned and now popular Chefs, believe it or not, there were still restaurants. Before Social Networking allowed each of us to share the doldrums of every day living and constant gratuitous Food porn, people went out to eat. Before gastronomy was a word used to market prepared comestibles, there were kitchens full of cooks. New York’s dining scene used to be made up of small Sandwich shops, Pubs, Luncheonettes and Diners. Sure there were super fancy places to eat and groceries but the above was the run of the scene. Some of these places are still with us but are becoming fewer and far between.

One such place is La Bonbonniere. Much like Adam Kuban noted on A Hamburger Today, I had to look up the word as well. It’s a long since unused wedding gift that was used to hold Sugar Cubes when it was more of a precious commodity. Our La Bonbonniere is an old-school luncheonette located in New York City’s West Village. You’ve probably passed by it, much like everyone else, dozens of times and not taken notice. There’s only a couple wooden tables around the room, a small counter with padded stools and a very small diner. It’s practically a dinosaur in terms in NYC restaurants. There’s no website, they only take cash and the menu, for a diner, is relatively small.

Clocking in at only 2 pages, the menu choices at La Bonbonniere range from Breakfast standards to Soups, Salads, Sandwiches and a few random daily specials stuck to the menu via hand written sticky notes. But someone knows about the place, in fact a few someones. The walls are covered with photos of years and years of past customers many in fact are autographed portraits of people who’ve achieved different levels of fame. Ethan Hawke & Molly Shannon’s photos can be found on the walls and I’m told that James Gandolfini, Philip Seymour Hoffman and Julia Stiles have all been spotted taking down a greasy diner meal at La Bonbonniere.

THE BURGER
I took a seat at a corner table and was quickly greeted with a menu and a glass of Water. Rodolfo told me that the Bacon Cheeseburger here blew his mind. I already knew what I was getting but wanted to double check by taking a look the menu. When you see the word “Beefburger” on a menu, you know it’s been around for sometime. Good enough. Beefburger Special with Fries, add Bacon, Done. It was only a matter of minutes before said dish arrived at my table. With lightning like speed a Burger with an insane amount of Bacon on it was staring me in the face.

Once my eyeballs got passed the Bacon pile, I noticed something curious; 1 slice of melted American Cheese on both sides of the bun. Interesting. I immediately tweeted at Dan from The Sporkful. His outspoken appreciation for Cheese on bottom called me for to post the alert. I snapped up a couple French Fries were just your standard frozen, crispy diner Fries into my mouth. I placed the top of the Sesame Seeded Bun atop the bottom with the Bacon and Patty and bit in. My request for medium rare had clearly fallen on deaf ears. Surprising too considering how quickly it came after I ordered. There wasn’t much seasoning on the Burger so I added a couple dashes of Salt & Pepper. I’ll say this, it was good. It wasn’t the best Burger I’ve eaten, especially at the steep price of $20 (tax, tip & soda included) but it was pretty good. I’ll bet at 2 in the morning after a couple of “pops” it’s probably pretty magical.

If you’re into a standard, old-school, greasy Diner Burger and Fries, this has your name on it. 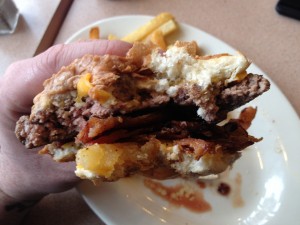 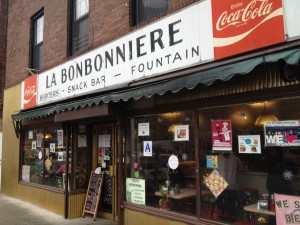 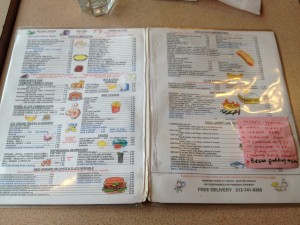 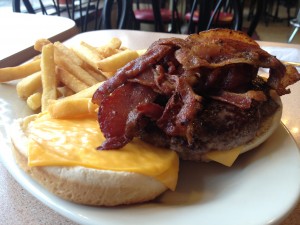 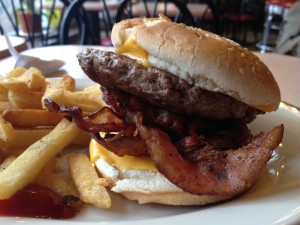