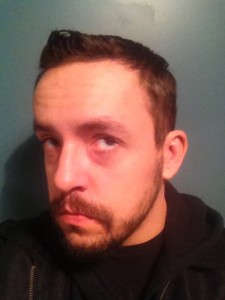 I grew up in Indiana eating burgers nearly every day of my life. I moved to Richmond Virginia when I was twenty to eventually drop out of college, have a string of uninspired jobs, play in a bunch of bands, and end up shredding beef at Kuma’s Corner in Chicago, IL. Email me.

Where do you live: Chicago, IL

Burger that haunts your dreams at night: Any burger from Ray’s Hell in Arlington Virginia

What is the one Burger you’ve always wanted to try but still have not: Minetta Tavern Black Label

The secret to making a great Burger: Don’t over handle the fucking beef and NEVER smash it.

Under no circumstances whatsoever, what should NEVER be put on a Burger: I have no qualms with putting nearly anything on a burger if it elevates the flavor

If you could eat any Mythical Creature which would it be: Not really mythical I suppose but definitely long extinct. Dodo.

If you could have a Burger with anyone alive, or dead, fictional or real, who would it be and where would you take them: Louis CK. I suspect anywhere we went he’d have a pretty good explanation for how underwhelmed he was with it, amazing or not.

Name one Burger in LA that for once, people should get off a plane and go eat instead of In-N-Out: LA? Eh… I have no idea. But, I suspect Father’s Office or Umami Burger are legitimate contenders. My time spent in LA has never yielded a positive result. But whatever you do, if you are trying to hawk Lemmy at the Rainbow Bar & Grill and you’re hungry, order something that is NOT the burger.

Please use this space to talk about or plug anything else you want: Pay attention to twitter for updates on what we’re doing @kumassous and @kumastoo Also, clue yourself in to the works of Rob and Allie Levitt at the Butcher and the Larder as well as Jonathon Ory at Badwolf Coffee. Both in Chicago. Oh. And check out Encrust. http://www.facebook.com/encrustmetal