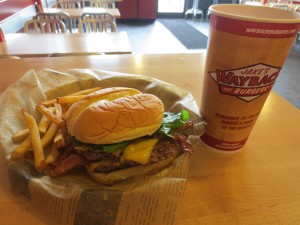 THE CONQUEST
In 1921 Walt A. Anderson and Edgar Waldo “Billy” A Ingram partnered up to open the very first White Castle in Wichita, KS. In 1940, McDonald’s opened their doors for the first time in San Bernardino, CA. These two events combined launched the Hamburger chain restaurant revolution that’s still to this day, taking the world by storm. Soon chain Burger restaurants stared popping up in every community in America serving huge quantities of mass produced food. Many of these chains to save on costs and increase on profits, served frozen and pre-formed Burger patties. They’re savory, flavorful, hot and plentiful but one thing they aren’t is fresh.

Now in the 21st century the tides are changing. Burger eaters want better, we want more and we want fresh. But, we still want them fast and you know what, we are willing to pay for it. We don’t eat just any old Burger just because it is one, we want a great Burger and that means fresh meat. Savvy entrepreneurs recognize this and fresh never frozen Burger chains are on the rise as a result. One such place changing the Burger tide is Jake’s Wayback Burgers.

The first Jake’s opened in 1991 in Newark, DE and has grown into more than 70 locations. In 2010 they changed their name to “Wayback Burgers.” They serve Hot Dogs, Chicken Sandwiches, Milkshakes, Salads and Hamburgers. Wayback Burgers are always made from fresh never frozen Beef. The people behind the business love Burgers and it shows in the way they run their business. Chain owners are in constant contact with the head office to help make sure the highest standards in Food, service and cleanliness are maintained to make sure that we the Burger eaters have the absolute best experience. The menu is very small, offering a few suggestions including their most popular offering, the Bacon Double Jake. All Sandwiches are completely customizeable leaving you the option to go as crazy as you like in creating the Burger experience you want to have.

THE BURGER
The only Wayback Burger currently in NYC is in Canarsie, Brooklyn. Lucky you if you live nearby! I stopped by for lunch one day excited to finally try one of their fresh, never frozen Burgers. Asking for a suggestion on what to order, the friendly gentlemen behind the counter suggested a Double Bacon Jake with Two Fresh, Never Frozen, 100% all Beef Patties, Four slices of bacon, American cheese, topped with Ketchup, Mustard, Raw Onions, Pickles, lettuce and tomato. Known as the “Jake’s Way”. It’s all served on an appropriately size soft Bun that cradles and comforts all the goodness inside of it. before the toppings and Patty are placed inside of it, the Bun is Toasted and Buttered making it even more special. The Burgers are made to order meaning, it’s not pre-cooked making for a fresher experience. The Bacon is exceptionally big when compared to the wimpy and small slices of Bacon you find at most fast Food joints. The Fries are skin on, which makes for an even tastier French Fry.

If you’re looking for a fast Food meal but you want a fresh and tasty Hamburger, point yourself in the way of the nearest Wayback Burgers. 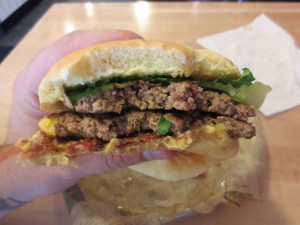 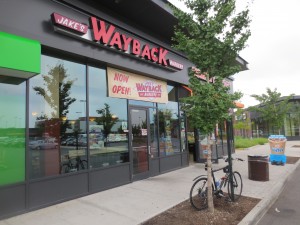 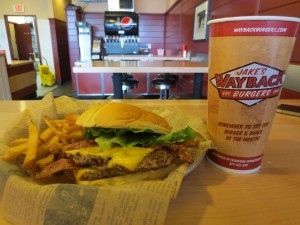