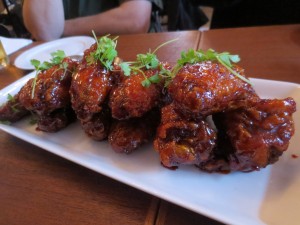 Distilled New York describes itself as an “American Public House.” This is a harken back to our colonial and European roots. A Public House was a tavern or pub that served modest Food & Drinks and served as a central location for the community to gather. Whether it was to get a fill after a long days work or to discuss important political matters, people’s social lives revolved around them. Today, Distilled New York takes this idea by serving gourmet Food, unique Cocktails and Craft Beer in a relaxed and open environment. Grab a seat at the bar, a table in the dining area or for the Food focused, there’s even seats centered around the kitchen.

Seeing as we are in round two of the NYC Wing-Off, any Wing goes, not just Hot or Medium. For today’s Wing-Off I wanted to focus on restaurants that served something way off the normal scale, which is why we chose Distilled New York. They serve Korean style Gochujang Wings with Point Reyes Blue Cheese. Korean Wings are covered in a light batter and fried, sometimes twice, to bring out an extra crispy bite in the skin. The sauce that Distilled New York uses is based on Gochujang, a Korean Red Chili that is very savory and pungent. It’s turned into a paste and then applied to the Wings.

Oh man. These are some awesome, awesome Wings. The Skin is just absolutely perfect; light and airy yet with a great crunch to the bite. It’s more like a mini piece of Fried Chicken than a Hot Wing. The meat inside is juicy and tender. You could tell they are using high quality Meat. The sauce has hints of Pepper, Chocolate, Coffee, Sweets and is just a little bit spicy. After only one bite, we called our server over and asked for another order. Although the Wings didn’t need it, the Point Reyes Blue Cheese was some of the best we’ve ever had. It was extra thick, very creamy and busting with stinky Blue flavor. Marc almost smuggled a ramekin out the door with us. 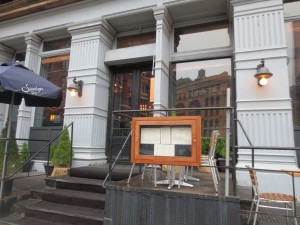 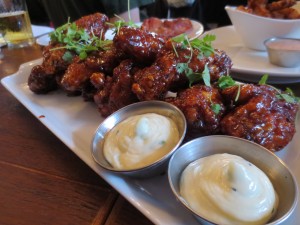 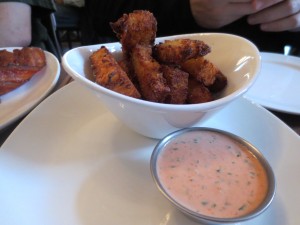 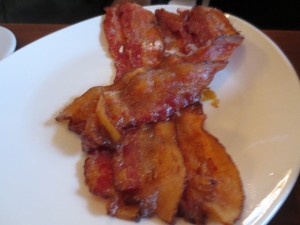 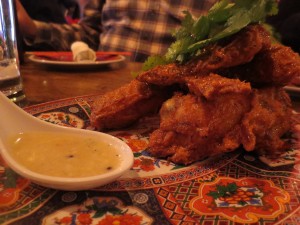 Come to New York. We have it all. You can find just about anything you want here. With such a large population of people from ethnic backgrounds that literally stretch around the globe, there isn’t some segment of the planet that isn’t represented inside the 5 boroughs. Because there are so many parts to our city, a mish-mashing of Foods happens frequently. Add Malaysian cuisine, which itself is a mish-mash of Malay, Chinese, Indian, Indonesian, Thai and Arabian culinary influences to our tasty melting pot and you’re going to get some awesome eats. That’s where Fatty Crab comes in. Their menu which features both traditional and inspired interpretations changes frequently to accommodate seasonal items and right now, including an array of different Hot Wings.

As it pertains to Wing-Off 21, Fatty Crab featured a Tandoori spiced Chicken Wing with Yogurt Curry Sauce and Cilantro. Sounds good right? It was! If it’s flavor you are after, this once is a dance for your taste buds. The array of Spices used in making the Wings at Fatty Crab represent all the different flavors and ethnic cuisines that come together to represent what Malaysian food is all about. It’s a savory taste bomb on a very wet and juicy Wing. The tangy Yogurt Curry Sauce works to both spice up and cool down the spicy heat in the sauce. Unique would be an understatement in describing these. 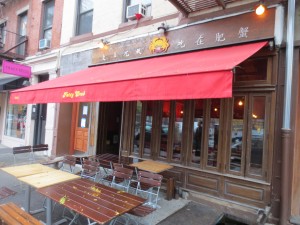 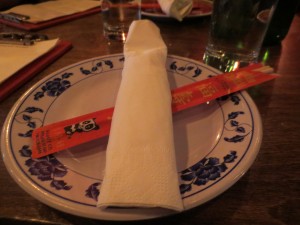 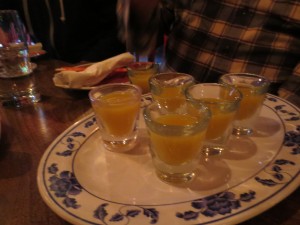 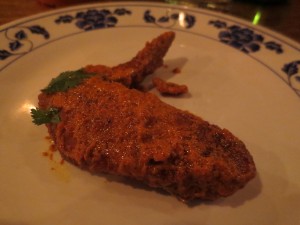 WING -OFF 21 OFFICIAL WINNER – DISTILLED!
I say this every time and honestly, it’s the truth; both of these Wings were tasty as anything and are worth you are eating. This whole competition is about eating, enjoying and comparing the best of the best, so the stakes are very very high.  … I say that every time too. Congratulations to Distilled New York for winning Wing-Off 21, Fatty Crab gave you a serious run for the money.