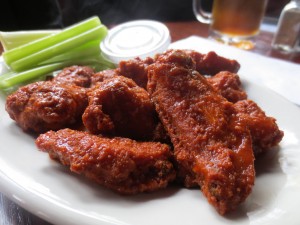 To be honest, this wasn’t supposed to happen. While out on Wing-Off 21, we had some extra time before a scheduled stop and decided to pop into a Bar for a Beer. That Bar was the White Horse Tavern. It’s perhaps one of the most famous drinking establishment’s in NYC, originally opening in 1880. Before it became known as popular location in the literary world because authors luke Dylan Thomas frequented the place, it was a bar serving Longshoreman. The White Horse Tavern went on to become a familiar haunt to names like Bob Dylan, Jim Morrison, Hunter S. Thompson and more. It still stands today serving up Drinks and Foods to those who enter through it’s doors, including those hungry for Hot Wings.

The White Horse isn’t really known for it’s Food but does offer a menu with general Pub items. They only Wings on the menu are “Buffalo Wings” which are served deep fried and sauced. The Wings aren’t particularly big, in fact, we all took noticed of the fact that they were on the small side. None the less, they were crispy and had a nice bite to the skin. They use a standard hot Sauce that’s not too hot, a little buttery and has the standard Buffalo Sauce. If you’re looking to take down a whole plate of Wings after a couple of frothy Beers, these will most certainly get the job done. 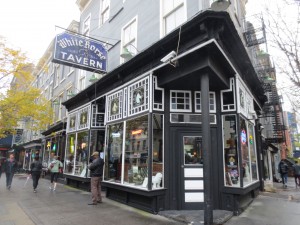 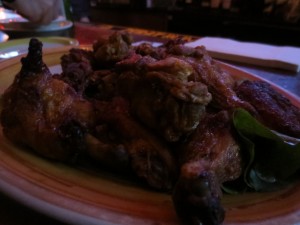 Like I said before, Wing-Off 22 was not in the plans. After leaving Fatty Crab during Wing-Off 21, we decided to pop down the street and say hello to our friend Kevin at The Cowgirl NYC. Originally opening in 1989, The “Cowgirl” is a Country Western Restaurant located in New York City’s West Village offering a menu of South Western inspired eats like Cajun Fried Shrimp, Enchiladas and an excellent bag of Frito Pie. Country Western stars like Reba, Bonnie Rait and Dolly Parton have all been patrons. It’s a cozy spot to grab a Drink, a Bite to eat or to gather with family and friends. They also have Wings.

After a couple of Drinks and laughs, the inevitable happened, we decided to place an order. The Cowgirl offers BBQ Style Wings “with a hit of Citrus served with our zesty Dip.” In terms of Sauce, they aren’t slathered like a text book Hot Wing. They are pretty tasty though and almost have baked in like flavor. It’s more about the subtleties of the sauce than it is about an over pronounced heat and tanginess. They’re really good, so good in fact, that we got a 2nd order. 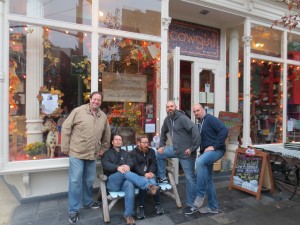 WING-OFF 22 OFFICIAL WINNER – COWGIRL HALL OF FAME!
After eating at all 4 places in one day, we started our normal discussion about which Wings we like best and how they measured up against one another. In those talks, we agreed that it was unfair to it all 4 in battle and instead, break it up into 2 different official Wing-Offs. In doing so, The White Horse Tavern was measured against the Cowgirl. Hence, the first ever Impromptu NYC Wing-Off. Both Wings are good and only a couple blocks apart so why not try both?