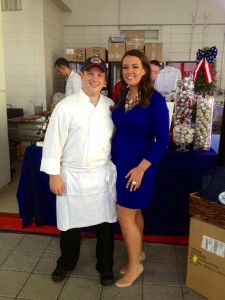 I have been in the business and worked at Joe’s for 20 years. I have a passion for training and developing my people, and finding innovative ways shake up American food.

Where do you live: Attleboro, MA

Favorite style of Burger: Traditional American with a twist

Burger that haunts your dreams at night: The Blue Ox Sin Burger.

What is the one Burger you’ve always wanted to try but still have not: Mac Attack from Boston Burger Company.

The secret to making a great Burger: Starts with the great grind of meat.

Under no circumstances whatsoever, what should NEVER be put on a Burger: I think you can put anything on a burger, but my definition of a burger is beef.

If you could eat any Mythical Creature which would it be: The Liger from Napoleon Dynamite.

If you could have a Burger with anyone alive, or dead, fictional or real, who would it be and where would you take them: I’d take Dale Earnheardt Jr. to Joe’s American Bar & Grill.

Name one Burger in LA that for once, people should get off a plane and go eat instead of In-N-Out: I have never been to California!

Please use this space to talk about or plug anything else you want: We have come in 2nd place in Boston Magazine’s Battle of the Burger three years in a row, we are really looking forward to claiming number one next year!