THE STORY
With a name like “Burgers and Cupcakes” how are you not instantly intrigued? My friend Jenn is a veggie but definitely a foodie and so I thought this could the perfect place for us to eat but also for the first ever veggie burger to be reviewed on Burger Conquest. We grabbed Jackie and Melissa and headed over for a treat. Burgers and Cupcakes is a division of Mitchel London Foods

(former chef to ex-NYC Mayor Ed Koch) and even though its not in the name, also serves pizza.

THE BURGER
The place doesn’t serve alcohol but will let you bring your own in. So hit the bodega on the corner before you come in, which is exactly what Jenn did! Even though it wasn’t busy, it still took the waitress a good 20 minutes before she took our order. Out of several types of burger, I of course, went for a beef burger cooked medium rare with shaved Parmesan and hickory smoked bacon. When it arrived without any bacon (they ran out) and on a plain white bun, my hopes weren’t high. The burger was cooked the way I ordered it but there was hardly any cheese on it and the burger itself was kind of plain. Not bad but certainly not award winning.

But burgers were only half the meal. We had to order cupcakes. Although they were out of a good half of the menu selection, they still had marble cake with peanut butter cupcakes. Mmm. Get in my mouth! The cake was moist and minimal. Let’s be honest, no one is REALLY into the cake part. The peanut butter and chocolate was really creamy and filled with flavor. I was glad I ordered a small but it was addictive enough to want a large cupcake.

In the end, its the cupcake that’s the winner but the combo is still a unique idea. It’s like boys and girls can finally agree on a place to eat!

And now, Ladies and Gentlemen, the first ever, veggie burger review on Burger Conquest…by Jenn P…

First and foremost I have to say that I’m honored to review the first ever veggie burger on the conquest. Thanks REV!!! To the die – hard meat eaters on the site, my apologies. I promise to go and slay some raw meat in your honor this weekend. That said, I do wish that it could have been ANY other burger in the world of all veggie burgers to be bestowed with the recognition of first veg burger review.

Order placed. 20-25 mins later, or so it feels (thank GOD for the B.Y.O.B. policy, great company and the anticipation of a yum-o cuppy cake after the meal)…finally the burger arrives. Alas, the pepper jack cheese that I ordered to spice up my world was nowhere to be found. Strike one. I then committed the cardinal sin and sent it back…might as well be reviewing a spit burger at this point : )

Before diggin’ in I do take notice that this veggie burger is not some pre-packaged frozen job. B+C does make them by hand which is a bonus and gives the illusion that I might have a good experience here…that is, until I take a bite.

I’m not gonna sugar coat it. First bite was a disappointment. I’m not sold that this is a true ‘veggie’ burger. Approx. 98% is made of rice with a few minuscule carrot and zucchini shreds tossed in – clearly for color -as it had no taste whatsoever except maybe for the cheese and some ketchup! 2nd bite helped me to deduce that the wonder bread bun action that is adorning this lovely little rice patty is not helping its cause either. Bun off to the side and another taste down and…nothing. No sparks, no fireworks…no love. Bland nothingness. Not even the spicy goodness of pepper jack could save it.

Moral of the story. Did I eat the whole thing? Yes. (hey what can I say? I had high hopes for dinner and didn’t eat lunch b/c of it) Would I visit again? Well, maybe if someone else was buying and I was broke or if I could bypass the whole ho hum veggie burger experience and grab a delicious peanut butter and marble cake cupcake instead! Veggie fans out there…dont bother with the burger…not worth your time. It doesn’t fly high enough on any radar to even register. Ah well, better luck next time. And there WILL be a next time. So, until then, my friends…peace out!
-JP 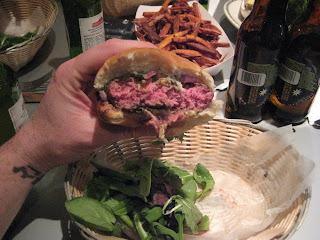 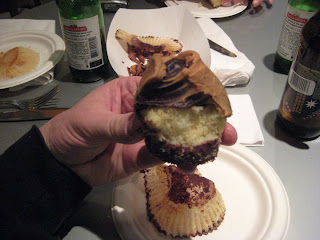 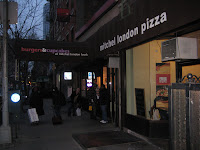 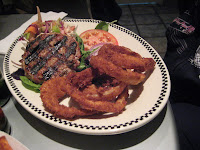 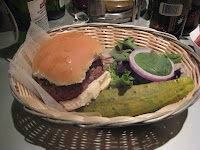 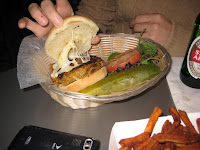 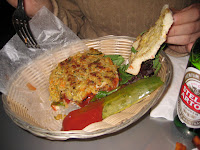 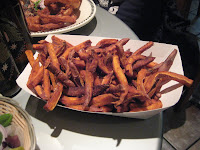 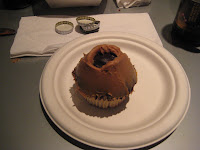 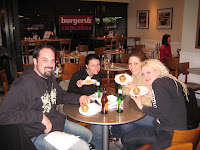