THE STORY
Louis Lunch claims to be the birth place of the hamburger sandwich. Visiting Louis’ as a burger fan is the equivalent of seeing Graceland for Elvis fans, Skywalker Ranch for Star Wars fans and the Pyramids of Egypt for history buffs. So as a burger enthusiast, I have tried several times to plan a trip. Louis’ keep some strange hours and if anything caters to the weekday lunch crowd. As I was driving back to NYC from the New England Metal and Hardcore Festival in Worcester, MA, I decided to pop in for my virgin voyage to Louis Lunch.

THE FAIL
As I pulled into New Haven, the excitement was growing in me like a nuclear fission reactor. I was about to explode! I pulled up to a parking meeting around the corner, gave a homeless man my left over change and walked around the corner to Louis. The feeling inside of me reminded me of being taking to see Santa Claus at the mall to ask for presents. But alas, there were No Presents for X-Mas as Louis’s doors were locked tight.

It couldn’t be true. I had waited so long, I had tried so many times. I checked the website the day before: “Although we love making burgers for you, we sometimes like to take a vacation too. We are usually closed during the second week of January, as well as the week of Good Friday through Easter Sunday. In addition, we are closed during the entire month of August for our annual spoon inventory. When in doubt, feel free to give us a call to make sure we are open, or just to place an order.” Was this some cruel joke? A phone call to Louis gave me the answer. Louis 16th Annual Spring break. Why wasn’t this on the site?!? As I sulked away with my tail between legs, I stopped at a pizza place for something to eat. Not only did I not get to eat Louis but I ended up with some of the worst pizza I have ever had.

Louis Lunch – one day I will discover your magic and that is going to be a glorious day. 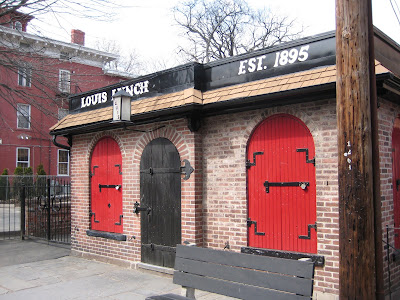