Dodger’s Stadium – Everything But the Kitchen Sink … and a burger

THE STORY
I don’t love baseball. There, I said it. But, I do love sitting outside while drinking beer and eating peanuts with my friends. So therefore, I love going to baseball games! In fact, my favorite bar in New York City? ANSWER: Yankee Stadium! And of all the sports, baseball has done a great job appealing to the foodies who are looking for more than some soggy fries and stale Cracker Jacks. What self respecting carnivore can avoid a hot dog at a baseball park? With competition increasing, parks are resorting to local foodie and chain faves to help bring in the dollars, Carl’s Steaks at Yankee Stadium, Shake Shack at Citi Field, Carl’s Jr at Dodger Stadium, Tony Luke’s at Citizens Bank Park, etc, etc.

THE FOOD
I was on tour with the band Shadows Fall and with a night off in LA, vocalist Brian Fair and I grabbed a few friends and had ourselves a field day at Dodger Stadium. I love me some stadium food, especially at baseball games. We started easy with some roasted peanuts. Sharing some peanuts outside with a beer is a special way to say “I love you America.” Once the we were on the highway on ramp to eats, there was no holding back.

Going full throttle, I ordered Gilroy Garlic Fries, a soft pretzel, nachos, a cheesesteak and a world famous Dodger Dog all at once. I figure why go easy when you can go for the gut-so! The nachos were pretty standard but Brian (a veggie) seemed pretty happy with them. John was loving on the pretzel and Zach was begging me for a bite of the cheesesteak. No one loves a cheesesteak like Zach. It was good but needed fried onions and a little more grease. I also prefer Whiz but honestly, worth it. The Dodger Dog was darn tootin although sized some where between standard and foot long. I love stadium dogs but when they get longer than standard, they start to skeeve me out.

The real winner here are the Gilroy Garlic Fries. Gilroy is a city in Northern California known as the “Garlic Capitol of the World.” The fries are nice and crunchy and topped with a sweet garlic and oil sauce. Unlike the garlic fries at Yankee Stadium, Dodger Stadium does not skimp on the sauce. Ron and I housed them. Just thinking about them now makes me want some!

The best part of the game happened when they blasted Journey’s “Don’t Stop Believin'” and put the words on the score board for people to sing along. What would Francis Scott Key say?

As we were walking out of the stadium at the of the game, we passed the Carl’s Jr and that’s when I realized, I forgot to get a burger!! I looked at it for about 60 seconds trying to convince myself I could eat one but the full belly just wouldn’t allow. Next time I promise! 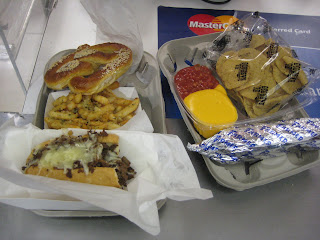 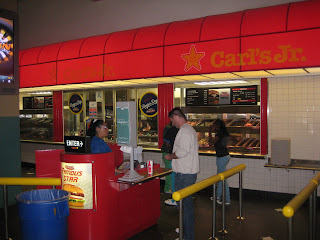 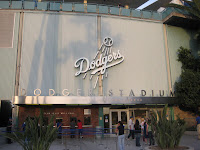 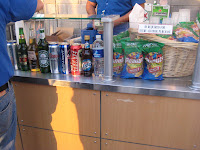 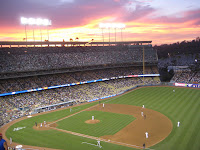 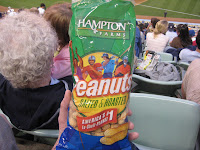 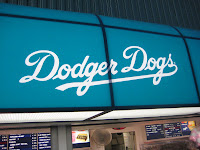 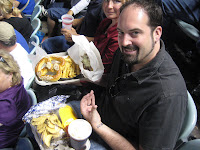 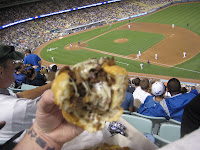 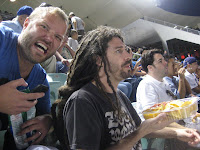 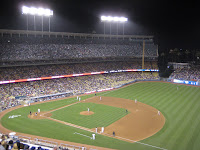 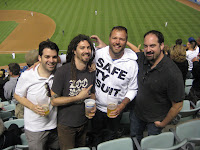 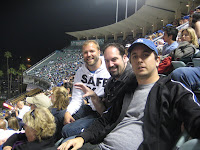