THE STORY
Before Cara and I left for our vacation, I emailed the “Burgerati” and asked for suggestions of tasty burgers in Portland, Seattle and San Francisco. George Motz from Hamburger America replied immediately (buy his book and movie if you haven’t yet!) “If you are driving from Portland to Seattle you must stop at Big Tom’s in Olympia.” That’s good enough for me, so I reached out to Eastside Big Tom’s and got a reply from Mike Fritsch, “We look forward to hearing from you. ” As we headed out of Portland this morning, we locked the Tom Tom GPS on Eastside big Tom’s and headed North to Olympia.

As we pulled up to old school street sign at the end of the lot, I was surprised to see the small size of this WA Capitol City burger joint. It’s a building, slapped down diagonal on a corner lot, no more than 8’x15′ (a true measurement that I made up for this story!) There are 2 drive up windows, 1 per side, both of which had a long line of cars anxiously waiting a sunny Sunday afternoon lunch.

People were frantically running from the burger booth to cars and back as well as from patrons who had walked up. Orders were being taken, burgers were being served and there was nothing but smile’s all around. Mike, son of Chuck (sounds like a modern day Ninja title) who owns Big Tom came to a dead halt in front of us. “You must be Rev. Chuck will be here in just a few and we’ll have some lunch. He’s been off with Grandma at the casino. If he has a big smile, you’ll know how they did.” Just as quickly as he appeared, he darted off to serve another customer.

A few minutes later a SMILING Chuck waltzed up onto the lot. “You the Burger guy that Mike is waiting for? Let me get your order.” We had obviously come for burgers and ordered accordingly but when given the choice between tot or fry, we ALWAYS go for the magic of the former. Chuck said “I pay way too much to serve quality french fries so I’m gonna throw in an order so you can try em!” Coming pre-warned, we also asked for a side “goop.” Big Tom’s signature burger sauce or “goop” is a thick salad dressing style sauce made from mayo, mustard, pickle relish and a secret salad seasoning It’s also known to make a sweet dip for your spuds. Chuck jokingly made fun of the both us for ordering or burgers without pickles. “Where’d you grow up? Russia?!l” before heading off into the hut.

We walked over the corner of the lot where the picnic area is located. Made up of 3 picnic tables, wood chips, burger graffiti from a local teen artist, garden gnomes and a collection of odd signs, the picnic are also has a few low backed chairs made for taking a breath after gulping down your meal. It was an absolutely gorgeous day outside, perfect for a burger picnic. A few moments later one of the car hops can bolting across the parking lot with a few brown bags covered in the East Side Big Tom logo and stained with fresh made, warm grease stains. It felt like fairies we’re dancing inside of me. We tore open the bags at the same pace of the workers and dug in.

THE BURGER
With grease adorning my fingers, I wrapped my mitts around the sandwich and chomped down. damn. Damn. DAMN…it was good. I got the “Little Tom,” double meat, double cheese, onion, goop, hold the pickle! It’s a classic old school burger, nothing fancy or crazy about it but quality beef made in a quality fashion by people who care as much about the quality of the food as they do the quality of the experience. The burger was just savory enough to have the sweet/savory goop meld together with the cheese in your mouth like it was dancing on your tongue. After a few bites, I looked up at Cara and she stole the words from my full mouth, “Damn. This is a really good burger.” We plowed through the sandwich and as many goop covered fries and tots as we could pile into our slop gullets. The tots were perfectly crispy and yes, Chuck, the fries are totally worth it. Just looking at these pictures is sending memories and now cravings back into my brain. 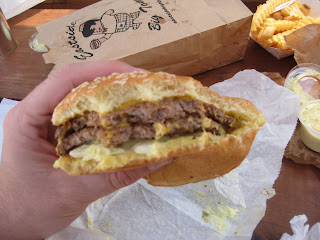 THE REST OF THE STORY
As we finished up our food, the lunch rush came to an end and Chuck and Mike sat down with us for a friendly Sunday afternoon chat. Chuck told stories about the restaurant, burgers, town politics, family, an animatronic elephant and 2 ceramic life sized bulls he once tried to buy for the parking lot of Big Tom. Mike colored in the stories with the details that only the crazy son of a crazier father could tell. Before Chuck bought the restaurant at age 25 it was originally a local chain called Egan’s. Some of their modern day customers have been coming around for so long that they still call it by the name and write checks out to Egan’s as well. However, it actually started with the name “In and Out” until later adopting the Egan name. Yes, they had the name first. The place started in 1948 and eventually grew to 9 locations. Since then they’ve paired down to just the one location where Chuck and Mike still run this family owned business. Chuck went on and on about the ever changing capitol city politics, 1.3 million bumper stickers he once bought, specialized golf shoes, Big Tom work practices (they pay higher than most jobs in town and even offer insurance) while Mike chimed in about their massive Halloween fundraiser, travel tips and managed to slip in that he was a vegetarian. These 2 are a special breed of people who just love life and people. We could’ve sat with them for hours and if we weren’t meeting friends in Seattle for dinner, we would’ve sat their listening until we got hungry again for more burgers! 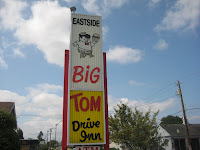 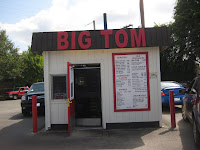 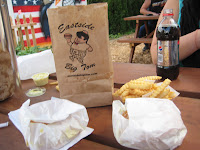 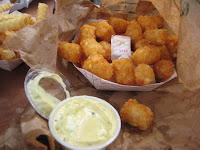 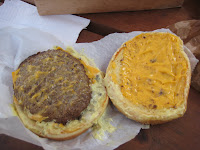 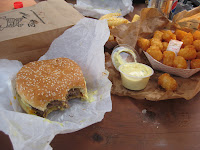 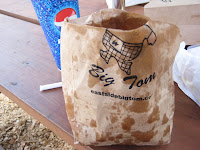 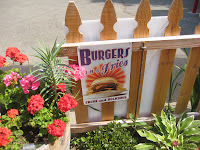 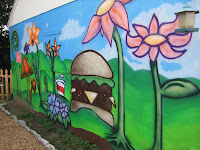 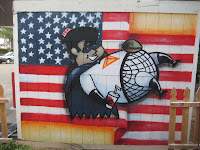 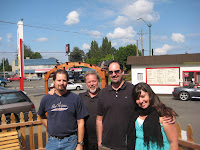