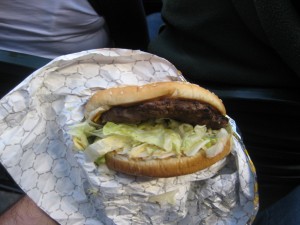 THE STORY
It’s the first day of school and your assignment; write an essay on how you spent your summer vacation. Well Mrs. Burley, you’ll be proud to know, I am still writing these damn things! My wife Cara and I took a week off to travel around the Pacific North West eating, drinking, sight seeing, catching up with friends, sleeping in late and going to baseball games. There is just nothing that can compare to sitting outside, drinking a beer, eating food and hanging with your pals at a baseball game. It’s a tradition of true America. So while in Seattle, we snabbed up our two friends and with the help of Donald from the MLB and Kelly from the Seattle Mariners and walked across the city to Safeco Field. One of the best parts of the stadium, nope, not the retractable dome (it takes 20 minutes to close and cover the field), the great food and beer selection, but the location. Safeco sits on the South side of downtown Seattle and is less than a 30 minute walk at a casual pace from the North end of town. It’s a beautiful modern stadium that upon entering, we noticed had a striking resemblance to NY Mets’ Citifield. Although the extremely unique baseball chandelier in the entrance is like nothing I have seen before. In fact, at first I thought it was made of deer antlers! A quick waltz around the stadium with a couple cold brews and we found it…Kidd Valley.

Kidd Valley is a Seattle area burger chain that serves “Old-Fashioned” burgers and shakes. Owner John Morris opened the first location in 1975, styling it after a hamburger stand near Mt. St. Helen’s that his parents used to take him to as a kid. Since then, they have grown into 8 store fronts and 7 stadium locations.

THE BURGER
As I approached the “bench” (counter) ready to order up a cheese burger and “One Full Pound” of Grounder’s “World Famous” garlic fries, I saw a sign that made me step out of line. Just on the left side of the Kidd Valley stand just past left field is a big neon sign that reads “Be Sure To Eat A Lot At Safeco Field.” I felt like a private answering to the Sargent at boot camp “SIR YES SIR!” We grabbed the burgers, garlic fries, another round of beers and headed back to our AMAZING seats, just behind home plate. The garlic fries were really good but honestly, you could put a chopped garlic sauce on fried shoe leather and I would eat it. Why they serve it with one apple slice though, still escapes me. I peeled back the foil on my cheese burger excited to taste a memory of John Morris’ childhood. The burger reminded me of a fresh not frozen, local chain version of the international Burger King Whopper with less toppings. It was immediately obvious that this burger had been sitting around a minute before I ordered. It was cold and dry and a real let down. I was excited to taste a slice of a Seattle burger success story. It wasn’t horrible and honestly, I wouldn’t hesitate to try another but it would have to be freshly made and from a store front Kidd Valley, not a baseball stadium location that has the terribly difficult task of serving thousands of people as quickly as possible. 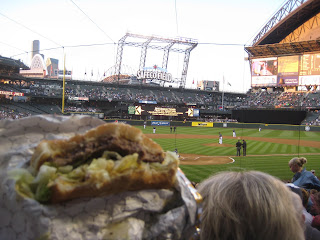 OTHER DIGESTIONS
If you go to Safeco Field, march right over to Porter’s Place DixieBBQ. You have the choice of BBQ pork, chicken, beef and hot links. But the real foodie in you will want to order one of the following;
“Porter’s Special”- “Spicy sausage covered in BBQ pork served on a hoagie bun.”
“Dixie’s Special” – “Spicy sausage covered in BBQ beef served on a hoagie bun.”
“Grand Slam” – “Spicy sausage covered in BBQ chicken served on a hoagie bun.”
I asked the kind lady running the stand what I should get. She answered “Porter’s Special,” and I replied “Is the pork better than the chicken?” “Well honey, the Porter is our #1 seller but if you are asking me, it’s all about the chicken!” Without hesitation I asked “Can I have 1 Grand Slam please?” Along with a bag of chips (that I couldn’t have possibly eaten) and a Mac and Jacks DELICIOUS African Amber, I carried this culinary explosion back to my seat. Cara’s jaw almost hit the floor! “WHAT IS THAT?!?!?” We dug in. To say it was amazing is a vast understatement. The Grand Slam was not only delicious but one of the most unique sandwiches I have ever eaten. A blatant over the top concoction that by all regular means is unnecessary but at the same time, a foodie must have. The BBQ chicken was juicy and flavorful while the sausage was smokey and flavor full. The sauce practically melted the hoagie roll adding to the mess of eating this monstrous explosion of food. So big in fact was the Grand Slam that it brought the potential devouring of other stadium treats like the patented Ichiroll (a sushi roll dedicated to Japanese-born Mariner Ichiro Suzuki.)

You gotta eat this thing, seriously. 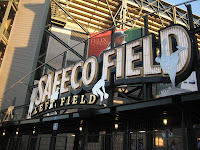 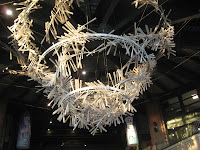 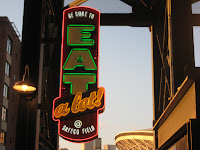 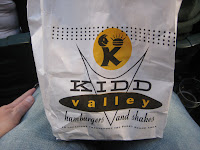 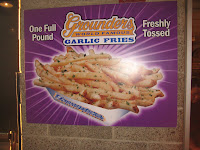 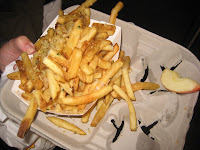 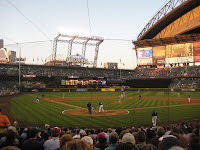 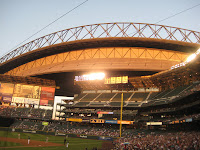 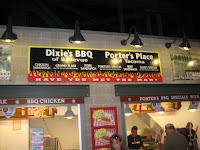 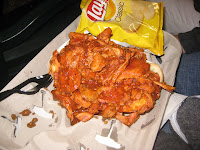 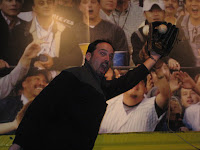