THE STORY
West Coast fast food chain, Jack In The Box makes a nice burger. On the last night of our Pacific Burger West Summer Eatcation, I got a case of the late night munchies. My wife had passed out in the hotel room and I was contemplating running out for a snack. That’s when I remembered there was a Jack In The Box next to our hotel. San Fran is known for being a very liberal city embracing all kinds of people and the ones in this Jack In The Box were the shadiest, strangest and drunkest ones of all! I had intended on a cheese burger and fries until I peeped the mini sirloin burgers on the menu. Mmmmmmmmmmmm, MMMMM, I do love me some sliders so why not?

THE BURGER
I grabbed my minis, curly fries and soda and high tailed it back up to my room. The curly fries and ranch dip were darn tootin and a reason to choose Jack In The Box over their competitors. The minis though, I won’t lie, they were terrible. The buns were dry, the meat tasted like a room temperature sponge dipped in garden soil. The onions, which normally are the best part of a slider, were flavorless and gross. I couldn’t even finish them off. What a let down. Should’ve known better and just ordered a regular burger. Sliders are better off made from a greasy spoon that specializes in the delicacy. 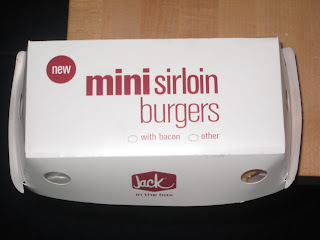 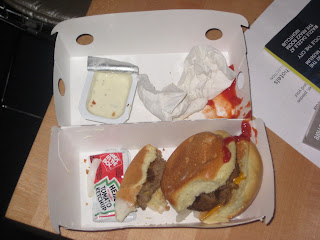