The Apple Pan – Cause For Cursing At The Elderly

THE STORY
Topping out nearly every “best burger in LA” list I have ever read, The Apple Pan has been serving the city of angels burgers since April 11, 1947. It’s owned by Sunny Sherman and Martha Gamble, grand children of the original owners Allen and Ellan Barker, a true family business. The Apple Pan gives you the difficult choice of only 2 burgers, the Steakburger or Hickoryburger, your noodle might burst before you also have to decide whether to also get french fries, pie or both. (Please take note of all intended sarcasm!) Chances are you will have to wait for on eof the 26 seats around the u-shaped counter. It’s kill or be killed when it comes to seating so pick a target and just stand behind them until they get up. Be weary of angry Mom’s with children who like to yell at a nice elderly couple who are looking to enjoy a Sunday afternoon burger…or maybe that was just during our visit. Notice in the pictures below, we didn’t all get to sit together. Zach had to sit by himself, while Cara and I got to enjoy the company of his lovely wife (and Burger Conquest virgin) Amanda.

THE BURGER
With no hesitation, I ordered a Hickoryburger (no pickles, medium-rare) with a slice of Tillamook , fries and a Dr. Pepper. Moments later I was sipping an ice cold soda server over ice in a paper cone resting neatly in a metal holder. The gentlemen working the counter followed them with a paper tray of well done french fries to which he saddled up an empty plate and poured us out some ketchup. Loved it!

If you sit at the counter on the same side of the entrance you can watch the chefs preparing the food. If you sit to the right, you get to watch the apple pies. Either position, will make you very, very, very hungry. There is a massive vat of the hickory sauce (a smokey ketchup like BBQ sauce) sitting on the burger counter and right before they wrap the little gem in paper, they slap it with a HUGE dollop from the bucket. It makes the burger one of the messiest but most delicious, unique and wonderful burgers in the free world. With only a few bites in my stomach, I started to eat slower, thinking “I have to savor this.” Thought about ordering a 2nd one but I was told the apple pie is not to be missed. Zach on the other hand, swallowed his in 2 bites! The cheese, sauce and burger mix together to form a tangy, smokey, meaty, soft, warm and delicious explosion of pure burger awesomeness. I haven’t used this term in a while but The Apple Pan is a without question, a beef touchdown.

My only thoughts were on the burger, I almost forgot to breathe! But then I remembered…dessert!! We ordered a slice of apple pie with ice cream. Shortly one gigantic, flaky, warm slice of apple pie with 3 scoops of pure vanilla ice cream was placed in front of us. Cara, Amanda and I grabbed for our forks like 3 medieval warriors racing to grab their broadswords before a massive battle. While eating my hickoryburger, I was thinking,, if the burger is this good, why is the place named after the pie? Now I know, because it’s freakin awesome! A sweet and cinnamony blast of of warm, soft pie filling surrounded by flaky and crunchy crust off set with a really strong tasting vanilla ice cream comes together to make of the best down home, country cooking style pie that seems like you can only get at Grandma’s house. The sweetness is unmatched and makes for a really intense taste juxtaposition from the also amazing hickoryburger.

I loved The Apple Pan so much that I might not only make it a regular stop on my trips to LA but also considering a second website…www.applepanconquest.com! 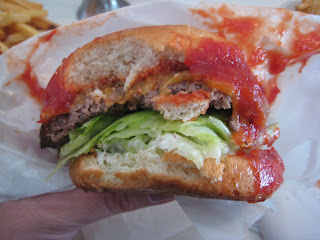 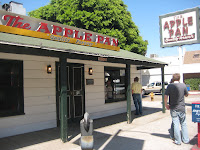 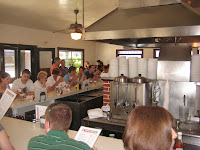 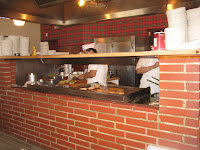 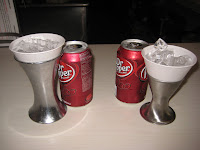 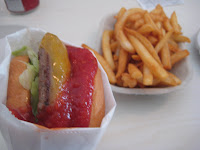 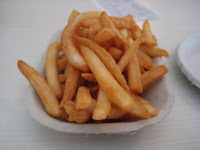 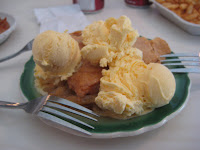 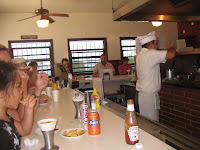 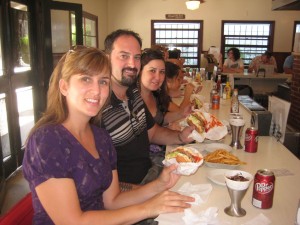