The Pony Bar – Heavy On Hops And Expectations

THE STORY
This craft beer bar opened up recently only a few blocks from my house. With my love for micro brews (check out my beer blogs on the website for the bar I am opening with some friends: One Barrel Bar) I was damn excited. Then the sign went up “The Pony Bar – All American Craft beer – Cask Ale – NYC,” and I was pretty upset. How do you open a craft beer bar and not serve all the great beers from Germany, Belgium, England and so on and so on?!?!?! But when I realized they do it just so they can keep all pours $5, I thought that was pretty damn cool. For those of you not in NYC it’s common to pay $6 for a Bud Lite in this town so $5 for a craft beer is a great deal. I stopped in shortly after they opened and realized not only was it a great deal but whomever was choosing the droughts, they knew what they were doing. If you follow The Pony Bar on Twitter, they update when they changes kegs so if there is something you like, you know when it’s on tap. This is important to know, when a tap runs dry, they don’t replace it. They grab a different brew and change the taps. You can also check out the current taps in real time on the website. Often times, the printed beer menu on the tables is already outdated by the time you sit down for a beer. On their website you can see a list of every beer they have ever served and while you are in the bar, they will keep a tally sheet on file for you to write down every beer you try and your personal rating. Pretty damn cool.

So right, this isn’t a blog about beer or bars, so what the deal? A few weeks after opening, The Pony Bar opened up a kitchen and put out a very limited menu. On that menu, a 6 Oz sirloin burger.

THE BURGER
The Pony Bar has quickly become my fave local haunt. The beer selection is great, the bartenders are friendly and knowledgeable and the atmosphere is fun. I love going there so the expectations for their burger was pretty high. I ordered mine with American cheese and as always, medium-rare. They don’t serve fries but they do give you a choice of cole slaw or their hand-cut potato chips. The burger is served on a fresh onion roll and accompanied with “Adirondack Bill’s Pickles.” I can’t stand pickles but my friends loved them and said they are spicy as if they had been marinating with jalapenos. The bun was fresh as was the very green shredded lettuce. The cheese brought some good flavor to the party but the burger itself, was just OK. Maybe my hopes were too high or the beer is just so good that it made it hard for the burger to compete. The chips are really good and make for a great salty companion to the craft brews. A friend has the roast pork tenderloin sandwich and loved it and every time I walk into The Pony Bar, I see people lovin’ them some sirloin burger. Maybe a 2nd shot is in order. 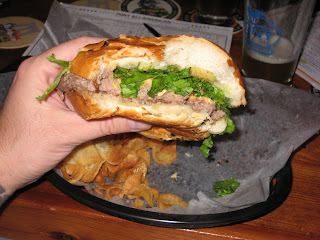 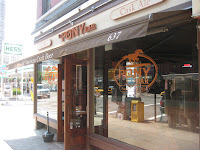 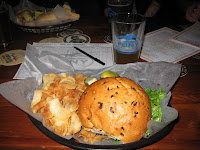 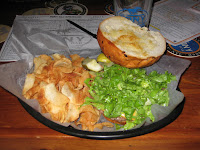