THE STORY
If I had a brother from another mother and he was British and the only things we had in common were food and music, it would be my buddy Paul. Paul is a booking agent based out of London and this dude seriously food obsessed. While on a recent visit to London, Paul demanded to take me out for a burger. I respond well to threats, especially about burgers. We had some business to talk anyway so I met Paul at the tube stop nearest his office ready for a burger.

After a short jog up the street, we arrived at the Fine Burger Co., is an up and coming burger chain in the UK serving hand-made burgers made from free range, grass-fed Aberdeen Angus, Hereford and Suffolk Red Poll Cattle (a breed of UK cattle bred without horns and have the ability to live in poor soil.) There are no additives, preservatives or any hormones in their meat as it’s all served fresh. Their dairy products are fair trade and even their buns (their own recipe) are made fresh and exclusively for the Fine Burger Co. You can also opt for a lamb, chicken or veggie burger, if beef is not your thing. The English have some of the most world renowned music festivals and at a couple (Lords, The Oval, Royal Ascot,V Festival, Glastonbury, Reading Festival, Latitude,Bestival, Big Chill and others) you can get a burger from the FBC.

THE BURGER
I LOVE cheese, who doesn’t? My favorite is Stilton. For those not familiar it’s in the blue cheese family but much stronger and more pungent. It’s the demon to Blue Cheese’s angel and is not for the week. It’s so strong in fact, that in England, one has to have a permit to make the cheese and currently there are only 3 counties have permits granted. So when I saw the words “Stilton Burger” on the Fine Burger Company, I knew what I had to do.

My medium-rare Stilton Burger arrived cooked a little more like medium but on a toasted multi-seed bun and was also topped with lettuce and red onion. The bun was sturdy but flavorful and held up well throughout the sandwich. British beef has a different consistency than we are used to in the U.S. It’s a little more dense and it’s also not as salty (naturally that is, you can add salt to anything) and the taste throws some people off. The Stilton cheese more than made up for the saltly flavor needs and in fact, made for a perfect compliment to the burger. This one was juicy, full-bodied and had a slight hint of pepper. I really dug it, in fact, I would say that this is the best burger I have ever had in the UK.

We also ordered some hand cut chips (“Chips” is what the British call “French Fries) with the skins on as well as the Tempura Battered Onion Rings. Both of which deserve honorable mention. If you have never been to the UK or if you are from there and have yet to try sweet chili sauce, what are you waiting for? It’s my favorite of all the fry dips the world has to offer. Some places, like the FBC serve it with sour cream, which is really good, but IMHO, not necessary.

I didn’t want one but Paul INSISTED we get a milk-shake. Not that I am not a fan, but I knew I had a long day and didn’t want to get to full. That idea took a nose dive when Paul ordered the banana and peanut butter milk shake. I gotta commend Paul, he made the right call, it was so fresh and so delicious! 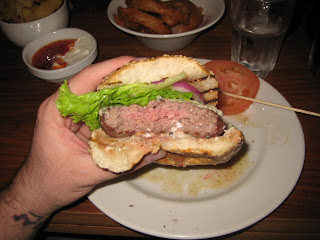 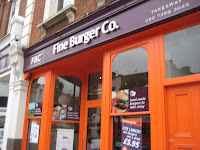 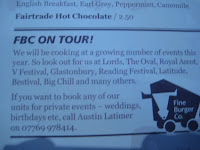 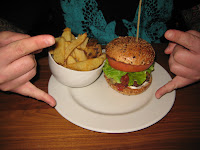 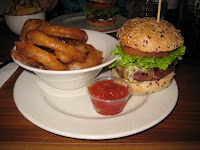 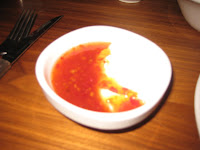 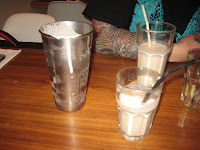 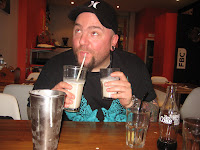 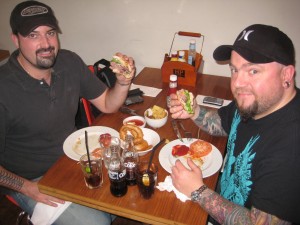