THE CONQUEST
While sitting at the airport bar in Austin, TX on my way home from SXSW, I was having a beer with my friends Bram and Karen who I have nicknamed “Pants.” She hates it, but that’s another story. I was telling them about my plans to eat 31 Burgers in 31 days for National Hamburger Month and Pants asked me if we could go to Burger King for part of it. Who am I to deny someone who is not only excited about the idea but was also a participant on one of the early Burger Conquests?!?

Pants has been dying to try out the BK Whopper Bar and I have been very curious to try the Burger King Stuffed Steakhouse Burger With Jalapenos & Cheddar. Most people might be surprised to find that I don’t hate on fast food Burgers. My love for the food item most certainly owes some roots my teenage years in suburban Michigan where eating fast food was a Friday night treat in my house. As for BK in particular, while I’ve always been a fan, back in February of 2010, the King showed me and Burger Conquest a whole lotta love and crowned me a knight in the Burger army. At that event, I was given a Burger King Gold Chain which I now refer to as my “King Bling,” and I wear it ALL THE TIME. If you saw my appearance on “Food Wars” with my buddies in Grill ‘Em All, I had the gold swinging from my neck in it. I wear it with pride but I haven’t brought it back to BK since. It was now time for The King to bring his BK Bling back to the King.

Finally that time had come and thanks to the EXTREMELY nice and supportive people at Burger King, we had a pile of gift cards to pay for our trip! Pants was very excited to finally get to the BK Whopper Bar where the concept is to serve only Whoppers to be ordered anyway you want and the ability to wash it down with a beer. Unfortunately for us, and with no explanation, this BK Whopper Bar, located in Times Square, was not serving an alcohol. For the life of me thought, I can’t figure out why they didn’t remove these signs: 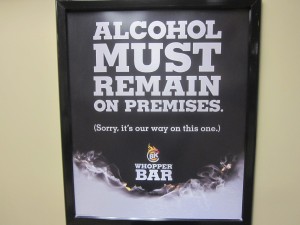 THE BURGER
I ordered the Stuffed Steakhouse Burger with Jalapenos and Cheddar but then added Pepperoni, crispy Onions and Bourbon Flavored Sauce. Burger critics say what you will but I really liked my Whopper. The Jalapenos have heat, the Cheddar has flavor, the Bun is soft yet sturdy and all the extra toppings had a lot of flavor. In fact, the overall sandwich was a little on the spicy side and I without a doubt enjoyed it. The extra toppings made all the difference. My French Fries however, not so much. They must’ve come from the tail end of a batch because they weren’t piping hot like the should be and by comparison to the the Whopper, were kind of bland.

The tangy, spicy, big flavors of the stuffed Whopper will most likely have me eating this Burger again in the future but only at another Whopper Bar. 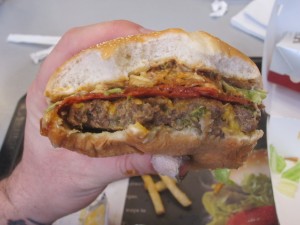 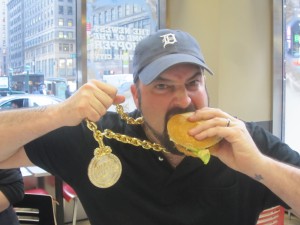 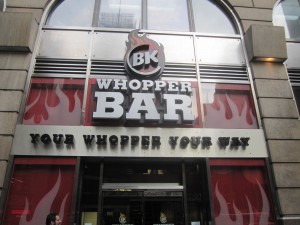 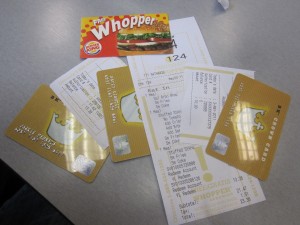 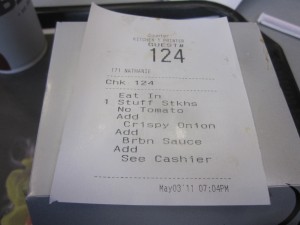 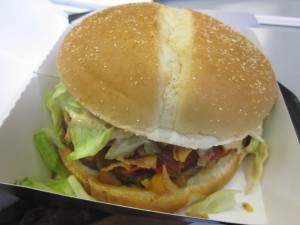 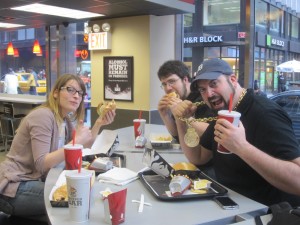 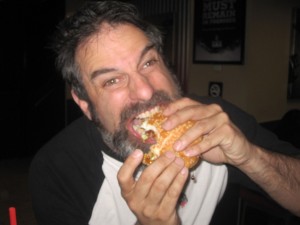 The Rev Meter for Social Community
The Rev recently created a meter for assessing how optimized a bar and restaurant is with social networking. He calls it “The Rev Meter.” By taking what he considers to be the 10 most important social networks and creating a point system, The Rev can accurately asses how well the business is using social networking as a tool. His goal here is to educate and assist great business to better effectively use these tools.