Big Apple BBQ – When The BBQ Gods Smile Down Upon NYC

Did you read that correctly? I’ll say it again but use a little more emphasis

You can pretty much find them, Beef or Pork, on many a restaurants menu but the difference between good Ribs and great Ribs is significant. Anyone can cook them but only a Pitmaster and craft them. While there is no shortage of great Ribs in NYC, there is definitely a plethora of them each year when the Big Apple BBQ Block Party takes over Madison Square Park. When the 9th Annual BABBQBP (that was unnecessary) rolled into town this year it brought with it 16 of the nation’s top Pitmasters with their signature dishes with the aim to fill more than 100,000 full of tasty BBQ. Some of them are local names but many of them travel from parts South and West bringing the regional specialties with them. The lines are ridiculously long but at the end of each one, you are rewarded with an $8 plate of delicious Q. 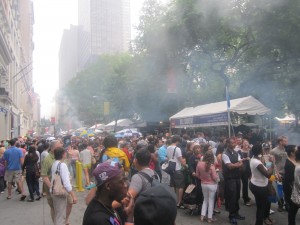 Block off the whole day as you are going to want to try as many places as possible. Be sure to come with a couple of friends or family members so you can all share in the food and try as much as you can. Lines can be as long as 90 minutes for each restaurant! If you don’t want to wait in line, there is the option to buy a fast pass. They include money towards  food purchases and allow you to wait in a separate VIP / press line. Thankfully, my friends, Marc, Doug, Melinda, Seth and I were armed with one of these and were able to get a great sampling of BBQ before the rain blew in and sent us for shelter.

What better way to start up an afternoon of eatin’t than with some delicious smoked Brisket!??! Spoiler alert, Jack’s Old South Brisket is about as close as this story is going to get to talking about Burgers. I love and I mean LOVE Barbeque sauce but when it comes to real BBQ, I want as little as possible on my meat and specifically with Brisket, I don’t want any. The two most important things to taste are the quality of the Beef and the smoke from the wood. Jack’s Old South Brisket nailed it home on both accounts. Marc and I fought over the pieces with the Burnt Ends so as to get the full flavor of each bite. 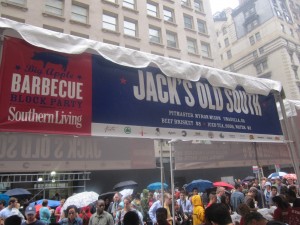 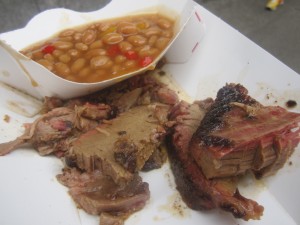 With the Brisket out of the way, it was time to sink our teeth into some Ribs. At last year’s Big Apple BBQ Block Party, Pappy’ Smokehouse was one of my highlights with their Short Ribs and I couldn’t wait to get my mitts on their Baby Back Ribs. Of all the BBQ spots on the North Side of the park, Pappy’s, no surprise, had the longest lines. The first bite confirmed that Pappy’s is still sticking to the non-sticky theory of not applying too much sauce to the Meat. The Baby Back’s were tender, succulent and bursting with great smoked Pork flavor. 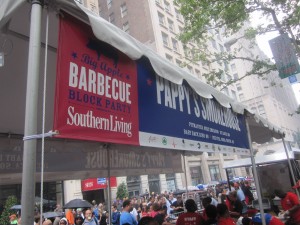 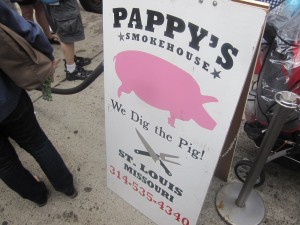 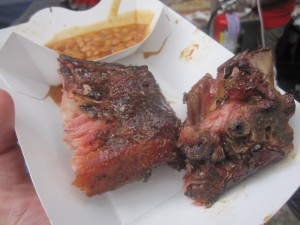 Man oh man, do I love me some Pork Shoulder and when I saw Ubon’s was serving it up, I jumped in line to get us a sandwich full of it. Unfortunately, I got handed one of their sandwiches where an employee got a little too heavy handed with the sauce. The bottom Bun was practically non-existent as a result from giving into the sogginess of the sauce. Sadly, our sandwiches were cold, which also drew away from the experience. It’s not easy to serve up 100,000 people outdoors while it’s starting to rain, so I’ll grant Ubon’s a mulligan. That aside, the Pork itself was smoked well and tasted good. 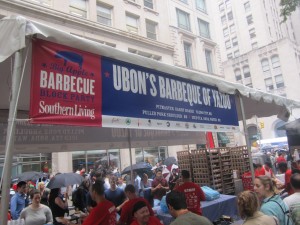 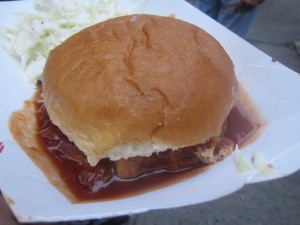 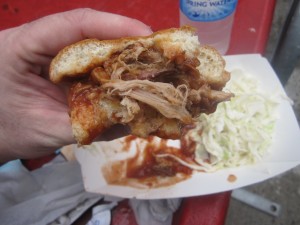 Martin’s was a fave from the 8th Annual Big Apple BBQ and when I noticed the short line, I took the opportunity to make it have the same honors for this year’s event. Keeping with the old adage, “if it ain’t broke, don’t fix it,” Martin’s was once again was serving up a Western Tennessee-Style Whole Hog. That means, they smoke the entire pig for hours and then pull the meat to serve on squishy roll. For those keeping track, Martin’s did the right thing and served this tasty little number on a potato roll It’s topped with Pickles, Coleslaw and Martin’s homemade BBQ sauce. I don’t pickles or slaw and removed them before eating. The tangy Slaw had such a distinct and tangy flavor that it left behind some taste on the sandwich, that in review, I didn’t hate at all. On the sauce-to-meat-ratio, Martin’s scores big. In fact, even though they make and extremely well-known and popular BBQ Sauce, there is barely any of it in the Hog. All real-smoked Hog flavors were absolutely wonderful. 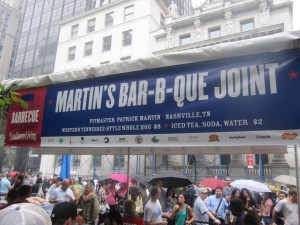 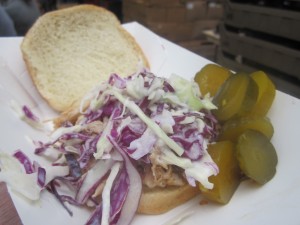 Normally I would advise a local New Yorker to skip over getting BBQ from a stand that is from the NY area. It’s not that they’re bad, but you live here. Go get them on your own and concentrate this event on eating from the visiting teams. However, as I walked by and smelled the Texas Salt & Pepper Beef Ribs from Blue Smoke, I lost all power to resist. Let the following serve as my lesson.

Before you read further, scroll down and look at these Ribs. Holy smokes (appropriately chosen exclamation)!! Words can’t possibly do a better job of describing these Ribs like my pictures do. In fact, looking at them right now is causing me to salivate and crave more! Every good culinary artist knows that the 2 most important spices are Salt and Pepper. There’s a reason you’ll find them on most restaurant tables around the world and it’s the versatility they posses as spices that bring out the best in natural food flavors, especially in Meat. Seriously, the Ribs from Blue Smoke were Mother Grabbin’ excellent. 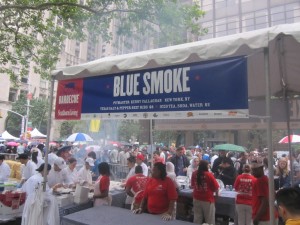 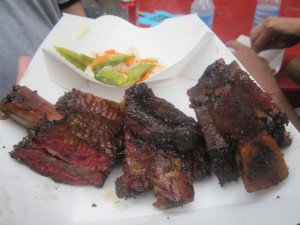 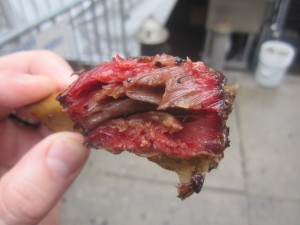 Jim ‘N Nick’s Bar-B-Q had one of the longest line of the day and it’s no surprise why. Their stand at the Big Apple BBQ is easily one of the most visually appealing. They have large grate grills out in plain site where they are cooking dozens and dozens of them at a time. They make it look so, so simple but the cooking doesn’t show the time and effort it takes to create a sausage 7 different seasonings and 3 different kinds of peppers. I’ve been quoted as saying the Big Apple BBQ Block Party is one of the best smelling weekends of the year and we can all thank Pitmaster Drew Robinson for pulling his weight. The VIP line was nearly as long as the regular line and we were going to skip out on the amazing link. But that’s when the BBQ Gods smiled down through the rain upon us and an incredibly awesome stranger approached us. “You guys about to wait in line for the link? We got an extra and aren’t going to eat it. Please have it.” I quickly diced up the link into equal bites and before we could say “THANK YOU KIND STRANGER,” the link was gone. Smoky and delicious are the only two words you need to describe the link unless you also wanted to throw in “you should eat this right now.” 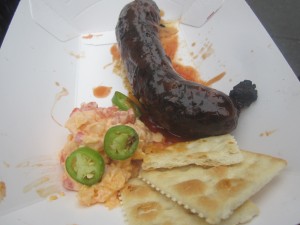 I wouldn’t be doing my title as “The World’s Most Socially Connected Burger Blogger” justice if I wasn’t checking into my BurgerConquest Twitter, FourSquare & Foodspotting to see what others were saying about the Big Apple BBQ. Not only was the 17th Street Bar & Grill from Murpysboro, IL the most talked about participant but it also seemed the most socially active on their twitter account. As I’m a sucker for great social community especially when it comes to food, I couldn’t resist. “Guys – everyone is talking not only about the Ribs from 17th Street but their is significant chatter about their beans. Let’s get some,” I proclaimed to my eating team.

Often times the internet lies and then sometimes, all you get is the truth. One bite of these Ribs and suddenly the 5 of us were all trying to mutter the words “OH MY GOD” with a mouth full of food. Not that anything else we ate was bad but the 17th Street Ribs were far and above my favorite item a the Block Party. I don’t where they source their meat but these Pigs definitely lived a happy life. My expectations were blown, especially when I saw saucing of the Ribs, which appeared to be more than I would normally appreciate. Hold my tongue! The 17th Street Bar & Grill get’s a A+ on the sauce-to-meat ratio test because these bone suckers were outrageously tasty. As for the smoky, salty and sweet BBQ Beans, they were a real winner too. 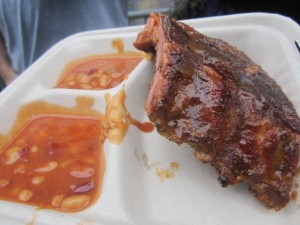 Just as we were done smackin our lips on the tasty, tasty Ribs, the misty rain, in the flash of a second, became a downpour. We took this as our “Q” from the BBQ Gods to exit on a high note from 17th Street Bar & Grill. Another delicious and awesome Big Apple BBQ Block Party has gone and I am already excited for the 10th annual next year. Thanks to Leah and Helen at the Union Square Hospitality Group for the VIP pass which clearly, did not go to waste!!